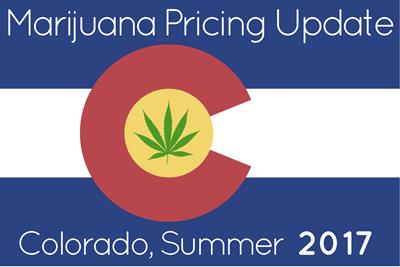 As we fall into autumn and the forthcoming winter, it’s the perfect time to reflect on yet another productive summer for cannabis sales. Alongside our friends at BDS Analytics, we’ve gathered data from many Colorado dispensaries to bring you the latest marijuana pricing information available.

In January of 2014, Colorado was the first state to allow legalized cannabis sales to adult-use (recreational) customers. Between January 2014 and July 2017, cannabis sales through both medical dispensaries and recreational retailers reached a combined $3.9 billion. Flower has been the most significant category of products sold in the market, contributing $2.25 billion, or roughly 58 percent of total revenues – a figure that excludes the flower that goes into pre-rolled joints which are tracked separately.

In 2014, the sale of flower contributed two-thirds of all revenues; fast forward to 2017 and flower’s share of sales has declined to just under 50 percent. The decline in share for this major product category is due in part to heightened demand for new product categories including concentrates, edibles and topicals, but also from a continued decline in the average retail selling price for flower.

Since 2014, the price of an average gram of flower sold in Colorado has declined 22 percent across both medical and recreational channels combined. In July of 2017, the average price for a gram of flower in Colorado was $6.50 (Pre-Tax) at adult-use retailers and just $3.75 at medical dispensaries. The decline in the medical channel has been far more significant as prices have dropped 43 percent in the 43 months ending in July 2017. Recreational retailers, in contrast, have experienced a more modest decline of 16 percent since 2014.

Declining retail prices are reflective of a competitive market in which both cultivators and retailers are constantly fighting for business. Historically, declining prices have converged with increasing demand and have typically resulted in overall increases in revenue. Since the spring of 2017, the increased demand has ceased to offset falling prices and revenues from flower have started to flatline.

The range of pricing from one retailer to the next varies widely. Volume-oriented retailers who compete for customers who buy larger quantities (e.g. half and full ounces) tend to have average gram prices of $4 or less (pre-tax). High-end boutiques that target shoppers seeking to buy smaller quantities of just a gram to an eighth skew to the other end of the spectrum with average gram prices of $8 and significantly higher.

At Colorado’s recreational retailers, in the seven months ending in July 2017, the average price (pre-tax) for a gram of flower sold for $6.65. The top ten strains listed below commanded a slightly higher ARP of $6.92 per gram. Combined, the top 10 strains were responsible for 17 percent of all flower sales in the channel. 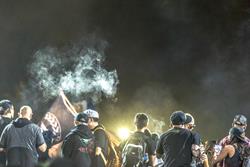 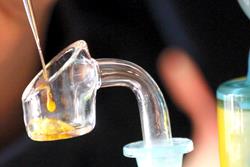