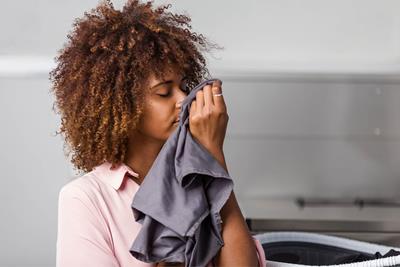 When trying to eliminate an odor, there’s a difference between rendering it invisible to the nose and actually eliminating the cause. Scent occurs in the mind, while the sensation is caused by matter – actual particles in the air around your nose. So when eliminating a scent, you can either hide it from your olfactory sensors or remove the odor-causing particles from the area.

This article reviews methods for getting the smoke smell out of your clothes including the science behind odor-eliminating cleaners, and general tips for how to not smell like weed after smoking. 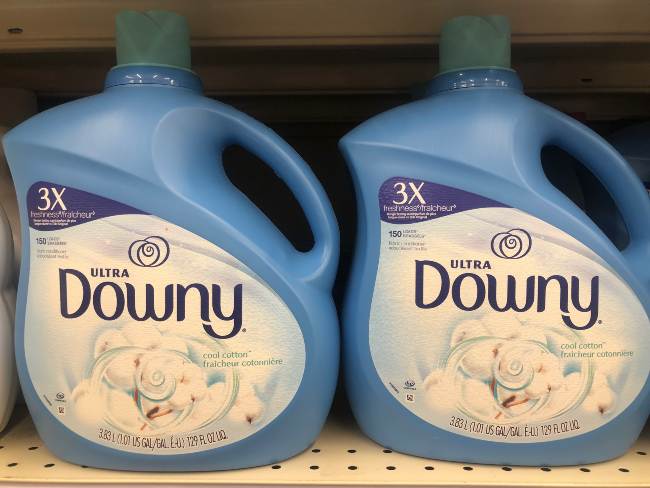 This may seem obvious, but it’s important to know how detergent cleans cloth to know how other options might work as well. Laundry detergents clean clothes by the use of “surface-active agents,” or surfactants. Simply put, the surfactants thin the water so it can reach deeper into clothing, while also bonding with oils from skin, hair, food, etc., before it’s all rinsed away. In a perfect world, this would be enough, but when it’s not, what more can we do? 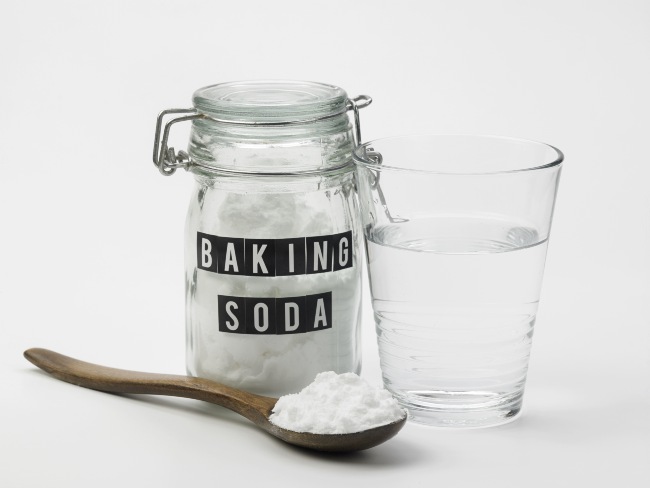 Soak your clothes in baking powder before washing to absorb the cannabis odor. photo credit

Formally known as sodium bicarbonate, baking soda is commonly used to fight food odors from the back of the fridge. When you were young, you may have also poured vinegar into it to make a fizzy volcano. That’s because baking soda reacts strongly with acids to neutralize the PH difference between them. This principle can be used to neutralize odors caused by acids as well, such as those in smoke.


For most effective use, soak your clothes in warm water with a cup of baking soda for an hour before washing. Once the baking soda is washed away, it will carry the odorous molecules down the drain with it. If the garment in question is “dry clean only,” you can also sprinkle the baking soda across the garment and leave it in a sealed bag, checking every hour or so for improvement. 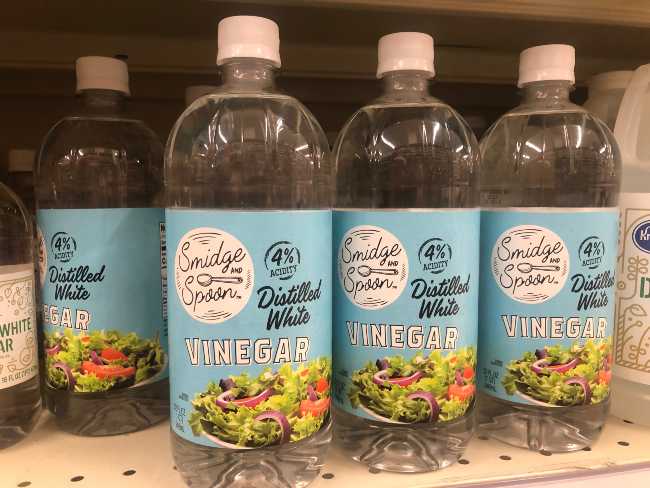 Vinegar is a common solution for stinky clothes.

If you exercise, you may already be familiar with adding vinegar to your wash. This common household acid can be used in an array of cleaning solutions, and your laundry is no different. Either soak your clothes in a mixture of vinegar and water before you wash, or add it during the washing machine’s rinse cycle and let it sit for an hour. 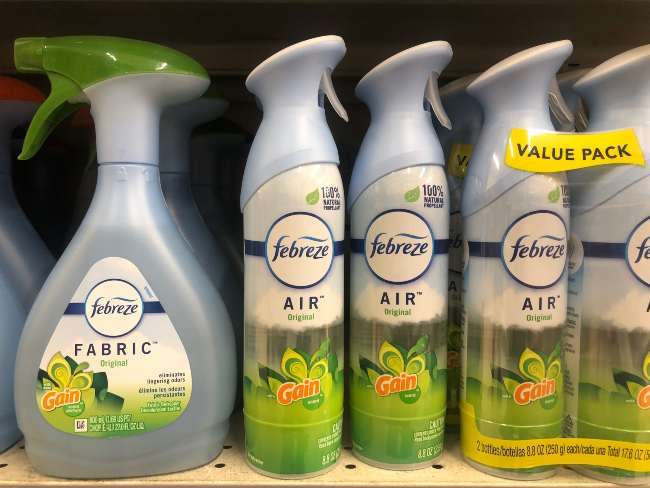 The active ingredient in Febreze is a chemical compound called cyclodextrin. Avid chemistry enthusiasts may want to learn more, but the rest of us only need to know that this compound binds with the molecules you’re smelling and prevents them from being detected by the olfactory receptors – from being smelled. While this is a great short-term solution, remember that cyclodextrins “trap” the scent, they do not remove it. The source of the odor will remain, however masked, until you wash your clothes. 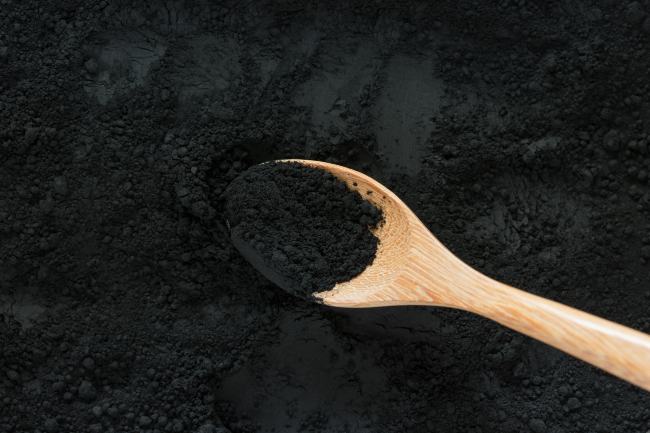 Activated carbon adsorbs gasses, liquids and stray compounds including the ones that cause odors. photo credit

Activated carbon works by “adsorption,” which is the process by which a solid retains a gas or liquid by holding it to the surface, as opposed to soaking it up entirely by the more common absorption. While activated carbon often appears as an unremarkable black powder, it actually has a staggering surface area thanks to its microporosity – that is, it’s full of microscopic holes.

Gasses and liquids may pass through the carbon, but along the way, the carbon is binding and retaining many stray compounds, including those that cause odors. The water filter in your fridge uses activated carbon to clean your water much the same way.

This black powder is already used in some hunting gear to trap the wearer’s scent from escaping, and it can be used to clean laundry much the same way baking soda can. Toss some carbon in a plastic bag to absorb the scent without getting the clothes wet, or soak clothes in a mixture with water. Be advised, this stuff can look like black dye before it all washes away. Try to contain it in a sink or tub. 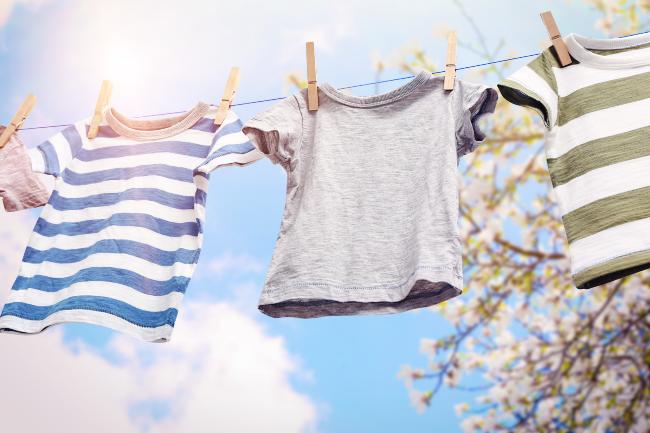 Nothing beats fresh air and sunshine to get the stink out of clothes. photo credit

The solution, then, is to dry the cloth at a lower temperature. Most dryers offer this option, but the best choice is still to hang the clothes outside. The comparatively low heat will prevent any odorous molecules from bonding to the fabric, at least allowing you to wash it again for improved results.

Sunlight can also cook smells out of clothes by virtue of ultraviolet radiation. UV light from the sun contains trace amounts of ionized radiation which damages organic matter. When this happens to our skin, we call it sunburn, but the same principle may be applied to organic acids or microorganisms like odor-causing bacteria.

Hanging a shirt out in the sun for a few hours may be enough to eradicate any organic source of bad odor. The fresh air will also wash several other natural scents through the cloth, covering any remaining smells. Be careful though with your favorite clothes because UV light will also fade dyes and pigments.

There’s an old stoner tradition to simply shed one’s shirt and set it aside while smoking. While this might work to some degree, it’s usually not a practical option, nor a comfortable one. To at least mitigate the odor absorbed by your clothes, try to smoke outdoors whenever possible to maximize dispersion of the odor-causing molecules.

Failing that, at least blow it out a window or through a fan to get the smoke away from you. Someday odorless marijuana may be available, but until then, if your clothes (or any nosy neighbors) continue to pick up the scent, you’ll be prepared.

Does Febreze Get Rid of Smoke Smell on Clothes?

Yes, sort of. Febreze and similar products use chemical compounds called “cyclodextrins” which bind with odor causing molecules to mask them from olfactory senses – from being smelled – but they do not eliminate the odor-causing compound. So Febreze is a fine short-term solution, but smelly clothes should be thoroughly washed with baking soda or vinegar.

How Long Does it Take for Smoke Smell to Leave Clothes?

The smell of smoke will linger in clothing until it is washed, though it may be masked by a cyclodextrin solution like Febreze.

How Do You Get Smoke Smell Out of Fabric Without Washing It?

Sunlight is one option, Febreze or similar products are another. Febreze will not eliminate the odor, but will mask it temporarily from being smelled (smelled as smoke, anyway. The nose will still detect Febreze). Sunlight offers UV radiation which will eliminate, or severely mitigate, smells by killing any odor-causing bacteria or organic acids.

How do you manage cannabis smoke odor on your clothes? Share your tips in the comments! 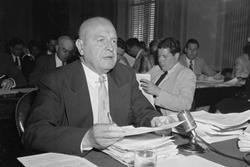 Harry Anslinger: The Man Who Made Weed Illegal

Harry Anslinger: The Man Who Made Weed Illegal 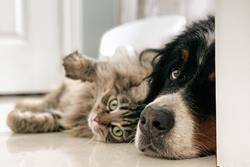