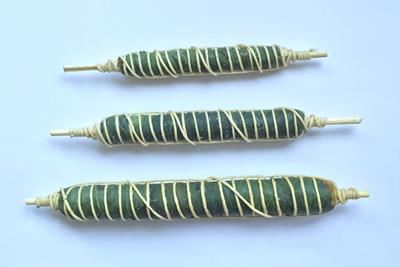 For those of us lucky enough to live in 420-friendlly states (especially states that have cannabis cultivation laws in place), the changing of the seasons brings about more than colorful outings and berry-picking adventures. Here in Colorado, for example, harvest time is all but gone and many of us have an abundance of homegrown to show for it. But what to do with all those leftover buds and fan leaves (besides smoking it or making edibles, that is)? How about turning them into premium cannabis cigars? Also known as “Thai Sticks” canna-cigars are perfect for those with a little patience, a lot of weed and an appetite for some seriously hardcore smoke sessions.

What are Thai Sticks?

Thai Sticks are some of the most potent cannabis cigars in existence. They originated in the 1970s and 80s in Thailand (hence the name) and were made by binding Thai cannabis buds to bamboo skewers, dipping them in opium, then using fan leaves to seal everything together. Thai sticks originally came to the United States with sailors who wanted to share these potent treats with loved ones back home but, once word of their flavor and potency caught on, large-scale importation of Thai sticks began.

At the time, very little cannabis was grown locally due to its illegal status and the time/space required to have a successful grow. Instead, almost all of America’s cannabis products were imported from other countries and, because Thai Sticks were so potent, transporting them (as opposed to just brick-packing) became much more appealing to large-scale distributors.

While modern Thai sticks contain no opium, they are still just as potent, using instead cannabis concentrates to seal fan leaves in place.

Though the creation process is timely (requiring weeks or more to complete), the wait is well worth it.

How to Make a Cannabis Cigar

With harvest season practically complete, now is the perfect time to try your hand at homemade canna-cigars. Though the original Thai Stick was made exclusively out of Thai cannabis strains, your cannabis cigar can be made out of any potent cannabis strain. Additionally, there are many ways to go about making a cannabis cigar. You can even purchase canna cigars from certain dispensaries. California-based Artisan Canna Cigars is in several shops across the state and is always there if you want to skip making your own and get straight to smoking.

For today’s purposes, we’re going to outline the cannabis cigar method we’re most familiar with, but feel free to experiment or research other methods if you feel compelled.

To make your cannabis cigar, you’ll need the following supplies:

Begin by removing all excess stems from your flower, taking care to keep the buds intact as much as possible. Next, press buds firmly around the skewer, packing tightly to help them maintain their shape – but not too tight as to impede the burn. Remember, once the skewer is removed, the hole left behind will allow enough airflow to smoke the stogie smoothly.

After the buds have been shaped around the skewer, use your twine to bind the buds in place. The twine will also be removed prior to consumption so be liberal in its application ensuring all bud is held firmly in place. Wrap it in parchment paper then store in the refrigerator for a few days allowing it to harden up.

Properly wrapping your canna cigar is one of the most important aspects of the process. Artisan Canna Cigars

After 3-7 days, remove the sticks from the refrigerator and remove twine from the sticks. The buds should retain their shape after the twine is removed making the next step much easier: wrapping the sticks in fan leaves (instead of traditional blunt wraps or rolling papers) to turn your bud stick into a full-fledged cannabis-only cigar.

This is where it can get tricky (and sticky), and your patience will likely be tried, but persistence will pay off so don’t give up. Essentially, you’ll be using cannabis oil as glue and leaves as your papers, coating the leaves evenly with the oil along the way.

A lighter can help melt thicker concentrates down to make them spread easier.

After a light coat of oil, wrap the bud with the fan leaves. Repeat the process until the whole stick has been wrapped and the oil covered then rewrap with twine. Store in an air-tight (or vacuum-sealed container if possible) for a few more days then repeat the process at least two to three more times. After the final wrap, leave your cannabis cigar to cure for 1-2 more weeks (the longer the cure, the smoother the smoke) before it’s time to light it up!

Thai sticks are not intended for everyday consumption. With something as high-quality as this, it should be saved for special occasions involving a decent amount of people. Because they are so dense, canna-cigars burn very slowly and each puff is extremely potent. For this reason, we recommend saving your carefully-fashioned cannabis cigar for a special event like a wedding or 420 celebration.

The cannabis industry is constantly churning out new premium cannabis products for the discerning consumer but perhaps the classiest of them all is something that was introduced to the states well before the legalization boom: Thai sticks. Made of potent cannabis buds and extracts, they are the original premium cannabis product and once you try one, you’ll no doubt understand why they’ve been so popular.

Have you ever tried a Thai stick or cannabis cigar? Tell us about your experience. 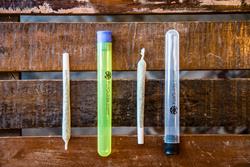 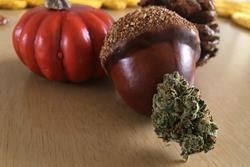