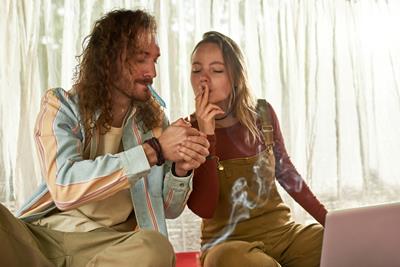 Most subcultures and niche groups develop their own slang, and cannabis is no different. Although cannabis is hardly a niche group with more areas legalizing it every year, the protracted criminality of cannabis has inevitably led to a dictionary of slang, code words, and adopted meanings that needed to be used for years to keep certain activities under cover, or to avoid saying anything blatantly incriminating.

But as this language was crafted and contributed to by generations of people across the globe, it began to speak to more of a culture than a crime, and now many cannabis consumers and industry insiders proudly use these terms as signs of a shared culture or even livelihood. 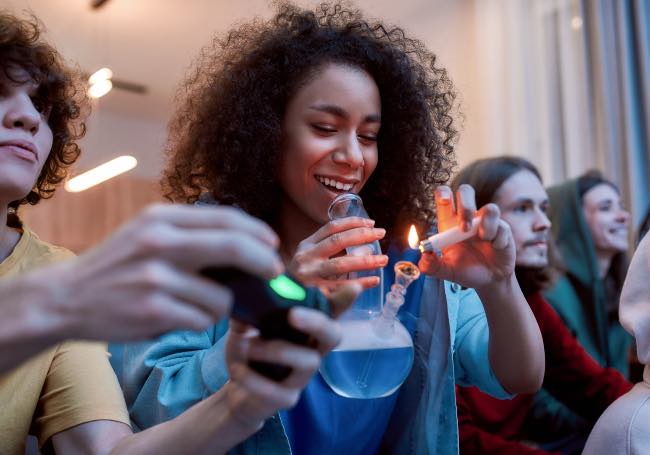 Slang for marijuana varies a lot depending on where you live and who you hang out with. photo credit

It would be impossible to catalog the entire lexicon here, in part because it is so vast, but also because it is still evolving, with new users and products, and new consumption methods joining the conversation every day. What we have compiled here is a collection of phrases that are both popular enough to hear, but still confounding to enough people that some translation may be required. For that reason, we have disregarded common terms like “stoned” or “stoner” for being commonplace, but we have also left out rare colloquialisms like “laughing grass.” We have, however, included common weights and measurements for easy reference.

This article reviews some contemporary weed slang as well as some old favorites, offering descriptions of each and some uses in a sentence. For a more complete collection of formal and informal terms, see our Marijuana Glossary.

A term used to describe marijuana or marijuana culture. April 20th (4/20) is also known as the primary holiday for cannabis enthusiasts.

Slang for cannabis oil and other concentrates as the digits turned upside down resemble the letters O-I-L. Similar to April 20th, July 10th (7/10) has become the day to celebrate with cannabis concentrates.

In discussions of legalization, “adult use” has become the more practical term for “recreational” cannabis. Many adults wish to have access to cannabis not merely for recreation, but as a matter of personal liberty — the right, as an adult, to use what they wish.

Terms used to describe the feeling of being extremely high on marijuana.

“I can’t smoke anymore, I’m too blazed from that blunt we smoked earlier.”

To selfishly hold onto a joint, pipe, or bong too long before passing it to the next person involved. “Don’t bogart my stash, pass that over here!”

Another slang for “joint,” or a marijuana cigarette. 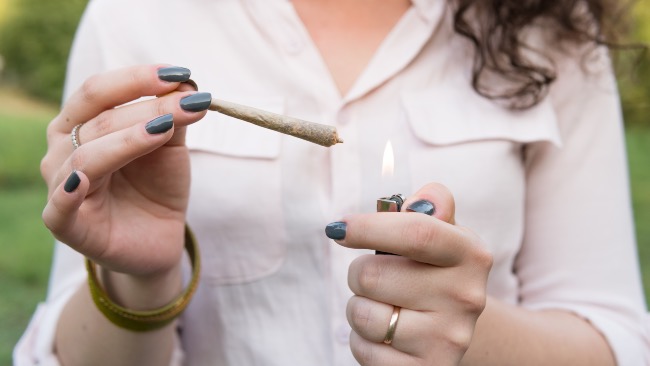 There are a lot of slang terms for marijuana cigarettes, including “joint” and “bone.” photo credit

Low-quality marijuana that is densely packed down to resemble a brick-like appearance. Brick weed often comes from the cartel and has been less common in the United States since legalization began.

“These nugs are super flattened, this must be brick weed.”

Describing a bowl that is no longer smokeable. “Let’s pack another bowl, this one is cashed.”

Cannabis concentrate that accumulates on the hands while handling raw cannabis flower. It can be rolled off the hands, balled up, and smoked.

Another slang for “toke,” or to smoke marijuana. “Do you want to come chop this Sour Diesel with me?”

A shortened word for reclaim, or the collection of concentrate residue built up inside a rig used for dabbing.

“Wow, your rig has a lot of claim in it. You might want to clean it soon!”

The potent aroma (and often potent effects) of superior cannabis, usually used as a compliment. “This is some dank weed, where can I get some?”

Another slang for “joint,” or a marijuana cigarette.

“This stuff is fire, I’m already super high off of only two hits.”

A general term for cannabis, ganja is literally a Sanskrit word for “hemp.”

From the Arabic “hashish,” hash is the collection of psychoactive resin from the cannabis plant for smoking, often shaped into a ball or brick.

The practice of smoking marijuana in an enclosed space to trap in all the smoke. “Let’s hotbox your house until we can’t see each other through the haze.”

The collection of trichomes that separate from raw cannabis flower when it is handled. Kief collected in the bottom of a grinder is an example of “dry sift hash,” as opposed to bubble hash, which is extracted in water. 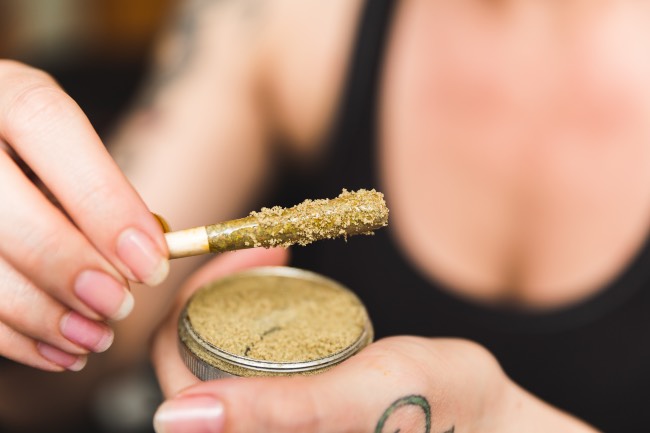 A landrace strain native to the Hindu Kush mountain range along the Afghanistan-Pakistan border, or any descendants from this strain like Banana Kush or OG Kush.

Marijuana that is sub-par or mid-grade. Mids are generally not desired by cannabis consumers.

“I’m going to have to pass on this flower, it looks like mids.”

A joint that has been smoked almost to completion, usually saved to be finished later. In Spanish, “la chicharra.”

Slang for a (usually covert) smoke session. “Let’s meet around back at 3:00 for a safety meeting.”

Referring to the lowest-quality cannabis. Most cannabis consumers would not smoke schwag. “I’m not smoking that schwag. It looks and smells terrible.”

An unfertilized female cannabis plant, literally “without seed” in Spanish.

Shortened for session, sesh refers to consuming marijuana with friends.

“Hey we just got some new trate and flower, want to come sesh for a bit?”

The crumbles of marijuana found at the end of a bag. Shake is often discounted in retail or medical marijuana dispensaries. “Come check out our specials on shake today.”

The act of lighting up a bowl, joint, blunt or any other marijuana-smoking apparatus. “Spark that bowl up and pass it over here.”

A marijuana cigarette rolled with both cannabis and tobacco. “I don’t care for spliffs because of the tobacco in them.” 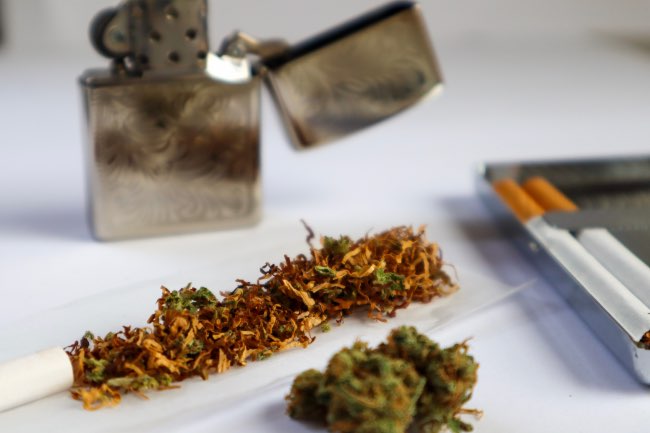 Short for “tolerance break,” a T-break is the practice of abstaining from cannabis to lower one’s tolerance. T-breaks can be anywhere from 2 days to 4 weeks.

Shortened from the word “terpenes”. Organic resin found in cannabis as well as many herbs and essential oils. Terpenes contribute greatly to the aroma, flavor profiles, and possibly even the therapeutic effects of various cannabis strains.

“The lemon terps in this concentrate give it a loud citrus flavor.”

To smoke marijuana. “Let’s toke up before the movie.”

Shortened version of the word, concentrate, trate refers to any form of concentrated marijuana products. “Let’s dab some trate!” 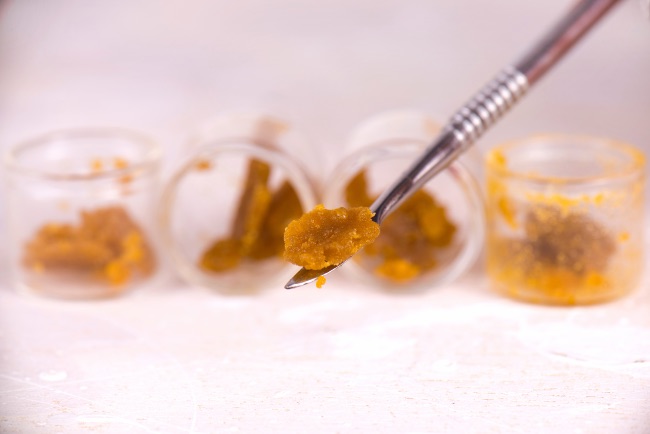 There are many forms of cannabis concentrates, including live resin, shatter, distillate, and more. photo credit

Any unwanted plant material that is cut off after harvest. Trim can include fan leaves and sugar leaves from the marijuana flower. “This trim is super frosty, I’m going to make some edibles with it.”

The hollowed-out wrapping of a cigar that is then filled with cannabis, or a blend of cannabis and tobacco.

One ounce of marijuana.

“Hey how much for that zip of Bruce Banner?”

¼ oz of cannabis flower, or about 7g.

What Does Weed Mean in Slang?

“Weed” is a common slang for cannabis, usually raw cannabis flower, but it can also refer more broadly to any cannabis product or derivative.

What Do Jamaicans Call Weed?

Jamaicans may refer to weed as “ganja,” which is a Sanskrit word that came over with Indian migrants in the 1800s. Bob Marley also popularized the term “kaya.”

What is Weed Called in Spanish?

In Spanish, weed is commonly called “mota” meaning “mote or speck,” or sensimilla, which translates to “without seeds,” referring to un-pollinated female cannabis.

What slang terms for weed do you love? Let us know in the comments below! 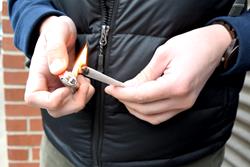 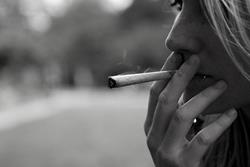