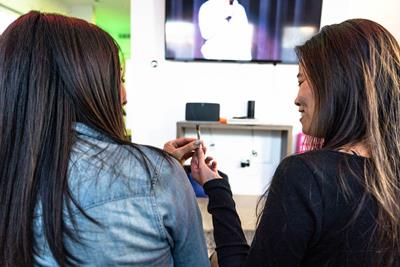 This year, countless people will try cannabis for the first time. As the most popular illicit substance in the world, recent legalization, decriminalization and medicinal initiatives across the globe will only further that prominence. Still, generations of stigma, myth, bias and misinformation remain a barrier to many who would otherwise benefit from the plant and enjoy its many aspects.

For those already acquainted with cannabis, bridging the gap of understanding to the uninitiated can be difficult. While cannabis information and safe access have made great strides forward, the conversation surrounding marijuana has a long way to go in keeping pace with changing times.

To better understand the process of becoming a cannabis consumer, I spoke with people new to the plant about their experiences and the factors that affected their decision to try it. I also interviewed budtenders who regularly play the role of intermediary to a new generation of cannabis users. Together, we identified the various common elements that kept people hesitant to try cannabis, and what changed their minds.


The biggest draw to most new cannabis consumers seems to be that marijuana can help where other remedies, mainly pharmaceuticals, have failed. Though we often refer to legalized cannabis as “recreational,” the majority of people I spoke to who tried pot for the first time admitted that they sought out the plant in order to help with some ailment. Alana, a financial advisor, first tried it at the age of 46 for her insomnia. “My kid said, ‘Mom, sleep isn’t illegal.’ Something just clicked.” “It’s all medicinal,” one budtender opined, “even when people say they just want to feel good. The thing behind that is usually some much needed stress relief.”

It’s How You Say It

How we talk when we communicate about cannabis affects those listening. In jest, people often speak of cannabis in a way that paints it as either silly or dangerous. Spending decades as an illegal substance has sprouted a rich lexicon of slang terms for cannabis (“the devil’s lettuce;” personal favorite). Though cannabis’ rich culture is a thing to celebrate, learning some proper terms and being capable of having a serious conversation on the topic helps in legitimizing the discussion. 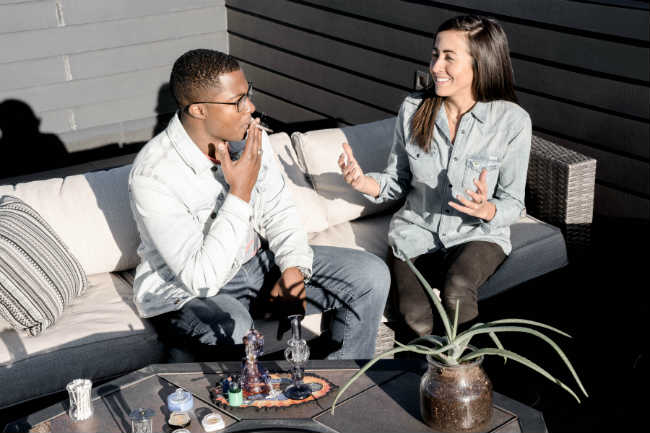 When it comes to talking with someone new about cannabis, communication is key.

Grandma might be more apt to listen if you referred to them as flowers instead of “dank nugs.” Even the term “marijuana” carries a negative association to many groups for its historical ties to racist sentiments. Be aware that it can be offensive and unproductive to many conversations. As Jane, a budtender, put it, “you don’t have to advocate for pot. Sometimes you have to advocate for people to be open to it, after that, it advocates for itself.”

Keeping discussion as factual as possible helps dispel negative myths and misinformation. However, overstating cannabis’ benefits can be equally harmful. In order to make safe, positive, and overall satisfying decisions with cannabis, one needs to be well informed. This can be difficult given the extreme amount of bias present in cannabis reporting, even from credible news sources and government officials. Cite with caution, and do your research. Dr. Sanjay Gupta’s CNN special Weed is a good starting point for beginning conversation with the uninitiated or those hesitant to breach the subject.

Jon, age 25, a transplant from Ohio, had never tried cannabis before moving to Denver. He told me one of the largest barriers in being open to cannabis was the great divide between consumers and non-consumers. Those that did scoffed at his unfamiliarity and teased, those that didn’t looked down upon anyone who would with extreme judgment. 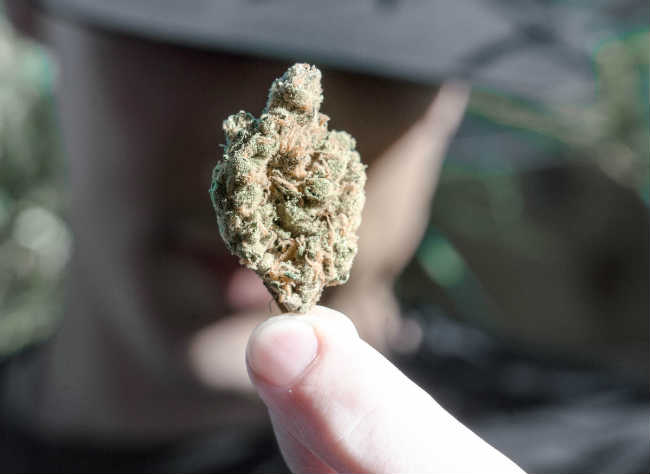 Understanding that everyone uses cannabis for different reasons is very important.

Until recently, Jon had no one to have an open and honest conversation about cannabis with, and the air of mystery surrounding it made it more intimidating. Cannabis consumption is a spectrum with many personal nuances and complexities. Embracing those who use cannabis in different ways than ones we enjoy or are familiar with is key to creating a larger cannabis culture for everyone.

Understanding the various different experiences and relationships with cannabis that others bring from their lives is vital to productive conversations about cannabis use. Not all cannabis interactions have been positive, and diminishing those experiences only widens the divide of understanding.

Cannabis' illicit status has caused extreme damage to many (overwhelmingly towards minorities and the underprivileged), which should not be ignored.

Similarly, cannabis is not a recreational substance to a large population who use it daily; it is a vital and desperately needed medicine, and speaking of it flippantly, or inconsequentially, even in a positive light, can be hurtful and offensive to those who depend on its help. Practicing empathy and understanding whenever discussing cannabis can go a long way in widening a person’s perceptions.

Encouraging someone to go beyond their comfort zone is a sure way to create a negative association to cannabis. Between people, and even between consumption methods (i.e. smoking vs. edibles), marijuana tolerances can have a wide range of variance. Just as with food, alcohol, or any other substance we put in our bodies, going beyond our limits can be a source of extreme displeasure and cause lasting negative associations. Budtender Matt lamented, “I don’t speak to Tequila after one bad fight we had a decade ago. I know that some people have a similar relationship with pot, and it just saddens me.”

Regardless of a person’s initial thoughts on cannabis, they are unlikely to improve if met with judgment and close-mindedness from the onset. Cannabis has played a million different roles in a million different lives throughout history. The societal shift towards embracing its numerous benefits can only continue through conscientious, open discussion.

How do you speak to people who aren’t sure about cannabis? What tips do you have for positively opening up the conversation? 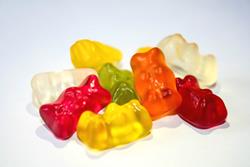 How to Make Vegan Cannabis-Infused Gummies

How to Make Vegan Cannabis-Infused Gummies 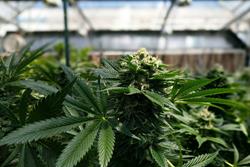