In my early college days, finding friends who smoked marijuana was never difficult for me (the purple hair and patch with the name "Bud" embroidered on it probably helped), but things have changed for me since then. I’ve graduated college, moved to a different state and started a family. And, though the party lifestyle is long behind me, it'd still be nice to find friends to share my cannabis hobby with.

Here are 7 ways I've come up with to go about it:

Get the skinny from a mutual friend

If you've met someone through someone else, then hit up your mutual friend for details about your new friend's marijuana use. If they've known your new friend for a while, they probably have a pretty good idea of their stance on the issue. If not, well then try some of these other tricks and see what happens.

Spark up a conversation

This kind of comes with the territory of finding new friends anyway, but can be a great way to coax a confession about their marijuana stance, too. You might mention new marijuana legislation or recent research about cannabis to gauge their response. Better yet, ask them if they've ever seen classic stoner movies like Pineapple Express, Up in Smoke or Friday. If they've seen any of these movies, chances are that they were probably high when they did!

A more subtle approach involves strategic placement of marijuana-themed goodies and accessories around you or your home. Personally, I like to sport a small button with a pot leaf on my purse, but others may choose to subtly incorporate a marijuana theme into their home décor (decorative bongs or plaques about "home baked goods", for example). With any luck, these items can serve as conversation starters during your next dinner party!

Ask to borrow a lighter

420-friendly dating sites are a great option for anyone interested in dating or finding new friends. Though fashioned similarly to other popular dating sites, these marijuana matchmakers differ in their prerequisite for approval in their system: must love weed. Some of the most popular 420 dating sites include High There, My 420 Mate and 420 Singles.

Colorado has an abundance of marijuana-themed activities and events to choose from. Whether you'd like to dance to some tunes, experience the great outdoors, take cooking classes or tour local areas and attractions, you will probably find a cannabis-friendly version of it.

One great way to meet new stoner friends (and learn something new in the process) is by taking a class through the 420-friendly art studio, Puff, Pass, Paint. Here you will learn step-by-step instructions about how to paint the image of the day while getting to know fellow classmates over a bowl or joint. The class fee is $40 and includes all painting supplies you will need, but doesn't include marijuana products so remember to bring your own to share.

Would you rather flip some discs? Colorado NORML is hosting its first annual Throw Down at Ghost Town Disc Golf Tournament and fundraiser at the Ghost Town Disc Golf Center in Russell Gulch, Colorado. For an $80 registration fee, participants can win prizes, earn bragging rights and leave with some awesome SWAG (plus, you will get a warm, fuzzy feeling for contributing to such a worthy cause).

There are also a number of networking and MeetUp events around the area that can help you establish your name within the community. These are especially beneficial for businesses and entrepreneurs, but anyone from the community can typically attend.

Marijuana is gaining a lot of acceptance around the nation with more than 50 percent of Americans now supporting marijuana reform. Of course, not everyone who supports reform will be a cannabis consumer. Nevertheless, if you're looking for 420-friendly people, then there has never been a better time than now to ask them how they feel about it. If they claim to support it but don't partake, then it is up to you to decide whether or not to keep your use under wraps. Either way, at least now you know for certain what their stance on the issue is.

It's no surprise that the number of blatant stoners is fewer on the playground than a college campus, but that doesn't mean that they're not out there; it just means that you have to look harder to find them. Fortunately, I've come up with a few sure-fire ways to tell if your new co-worker or playground parent likes to toke in his or her off-time, too.

What do you do to find other stoner friends? Comment below or tell us about it on Facebook. 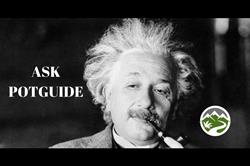