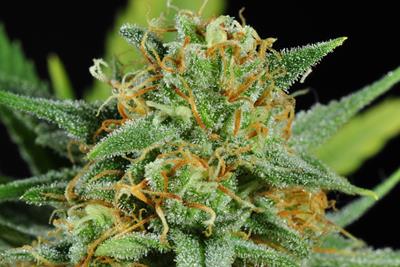 Few modern symbols are as iconic as the cannabis leaf. However, due to its restricted status and federal classification as a schedule I controlled substance, many cannabis enthusiasts have never seen an adult plant. This guide is intended to familiarize cannabis consumers old and new with all of the parts of our beloved cannabis plant from the ground up.

Battle of the Sexes

It is important to understand that mast cannabis plants are dioecious, meaning there are significant differences between male and female plants. The ones that produce cannabinoid-rich flowers are female, and the ones that produce pollen sacs are male. It is possible for a plant to emerge hermaphroditic and be monoecious, meaning it will have both flowers and pollen sacs, but this happens less frequently.


Female plants garner most of the spotlight in the cannabis world, as they produce much higher levels of cannabinoids, including THC.

Male plants are seen as undesirable due to their low cannabinoid production, and that exposure to female plants will cause the females to seed. While this is bad for smoking, male plants play an important role in the cultivation and breeding process and are also used for their fibers. With that sorted, let’s move on anatomy of a plant.

Follow along as we break down some of the most critical components that make up a cannabis plant! 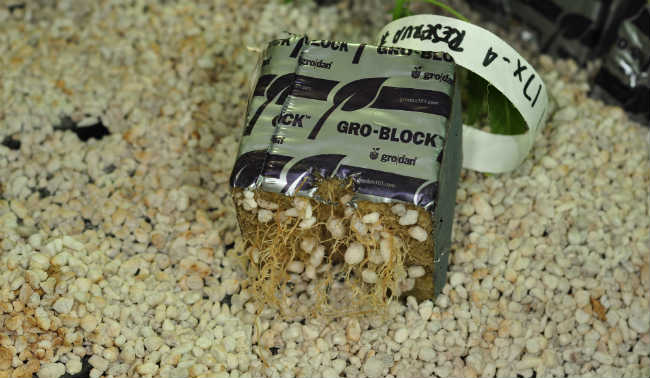 Example of cannabis roots in the early stages of growth.

Roots draw water and other essential nutrients into the plant from the soil. As a seed grows, a main taproot will emerge and branch out into a fibrous network within the soil. Cannabis plants have small, whitish roots that like to fill their potting mediums. This creates a sponge-like root network needed to meet the plant’s high water demands.

Cannabis emerges from a single main stem that branches off on either side into leaf nodes. This main stem not only provides structural support, but also contains the vascular system of tubes that supply the rest of the plant with water and nutrients. 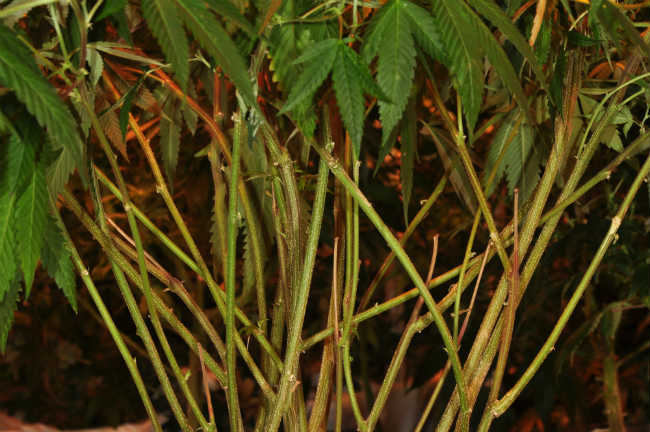 Cannabis plants can have many branches that grow from the main stem.

If the plant were a city, think of this as the main highway. Within the stem system is xylem, which moves the water and nutrients through the tubes. 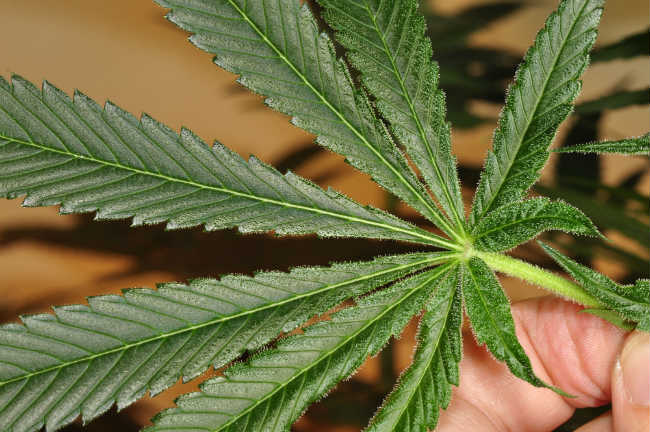 Most people know marijuana by the distinct shape of its fan leaves.

Being the most iconic part of the cannabis plant has led many people to incorrectly assume fan leaves are the part that THC comes from. In reality, fan leaves contain very low levels of THC. Cannabis leaves act like most leaves on plants and collect sunlight for energy. Leaves also shade the delicate buds and protect them from sunburn.

Pre-flowering, the modified leaf structures (called bracts) that house the potential pollen sacs or buds-to-be look quite similar. They are the small, pear-shaped bundles nestled where branches divert from the stem. If white, whip like hairs begin to surface from the bract, the plant is female. If the bract becomes more full and bulbous (sometimes referred to as crab claws) the plant is male and will produce pollen sacs. 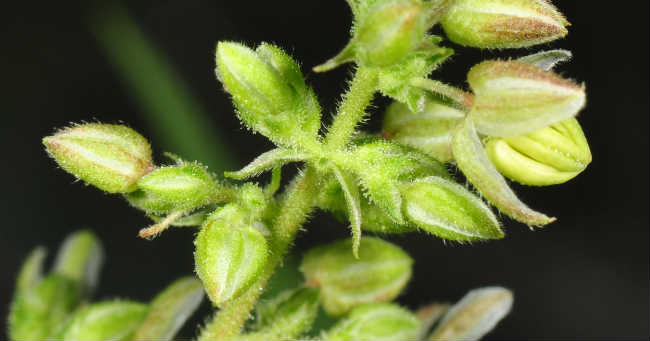 Example of a male cannabis plant.

Sexing plants before the pollen emerges is key to maintaining a grow, as the pollen will spread easily to female plants and produce seeds. In addition to seeds, fertilized plants cease their resin production, meaning they aren’t as good to smoke. To avoid cross contamination, breeders must pollinate under intensely controlled conditions. 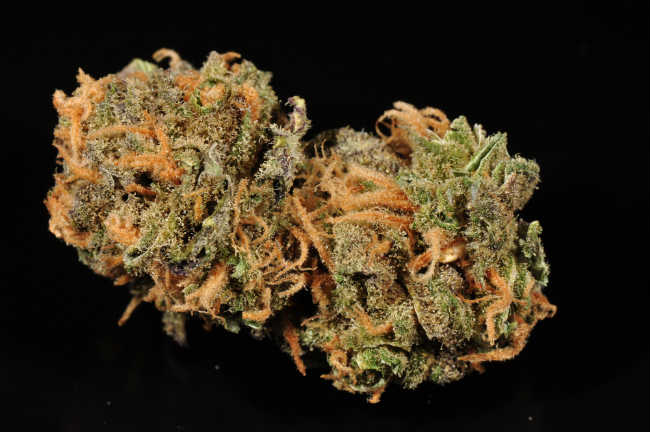 Cannabis flower is the most well-known aspect of the plant.

Flowers produce compounds for the plant, attract pollinators, and once fertilized, produce seeds. Each female cannabis plant will end in a main flowering top referred to as the cola. Modern growers have developed methods for creating multiple main colas such as pinching, topping or low-stress training (LST) to increase yields in limited grow areas. In addition to the main cola, smaller flowering ends will grow at branch nodes.

Pistils are the “hairs” on the flower. They are the plant’s female sex organs, which collect pollen for fertilization after blooming. Early on, as flowering begins, the hairs will be white, but will mature in to red, brown or orange hues. 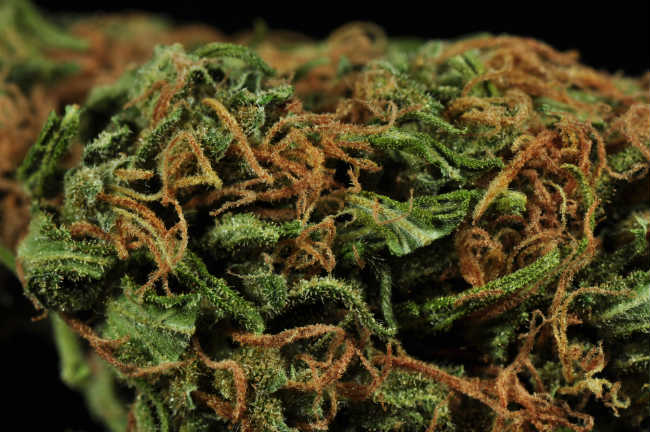 Example of a bud with a good covering of pistils.

Contrary to popular belief, hairs play no part in THC production, and their prominence (or lack thereof) has no direct correlation to bud quality or resulting high – although they can make the buds look very pretty!

Calyxes constitute the majority of the bud and appear as compact teardrop folds. Distinct from the sugar leaves that grow amongst them, calyxes turn into the seed incubator on the female plant when fertilized. Unfertilized, they are the main trichome factories for cannabis.

Finally, though they are some of the smallest parts of the plant, trichomes are the star attraction. Trichomes are small, hair like structures that produce the resin of the cannabis plant, responsible for creating the psychoactive and medicinal effect that make it so famous. For the plant, these compounds act to fend of disease and infection, offer safety from UV exposure and act as a deterrent to predators. 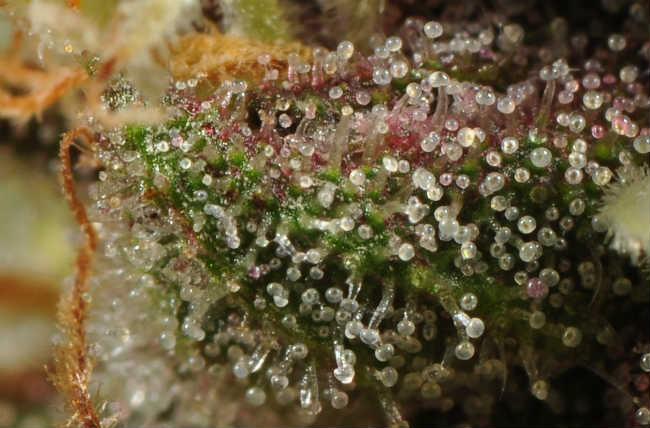 An example of trichome coverage on cannabis flower.

There are actually three types of trichomes, varying in size, found on the entirety of the plant. However, the largest of these, capitate-stalked trichomes, are produced primarily on the calyxes and surrounding sugar leaves. Capitate-stalked trichomes contain the highest concentration of cannabinoids and terpenes. They begin clear, but will become white to cloudy at they develop, usually resulting in an amber hue.

We hope this guide has been helpful to you in understanding and appreciating the miraculous cannabis plant. Remember, almost every part of the marijuana plant is useful one way or another so be sure to take full advantage of it's versatility!

Are there any other elements of cannabis you’d like covered or expounded upon? Leave a note in the comments below! 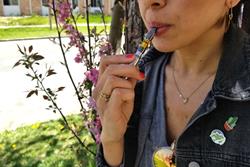 Why Do Some People Sneeze When Vaping?

Why Do Some People Sneeze When Vaping? 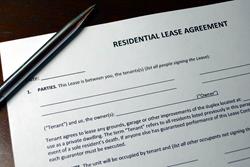