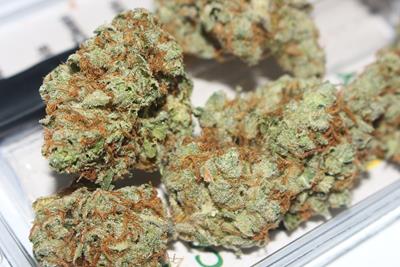 Does cannabis have an expiration date? Most users buy and consume cannabis in small enough amounts that the question never comes up. But if you’ve grown a large amount, or stumbled across some old weed you forgot you had, you will need to know: does weed go bad? And what happens if you smoke old weed?


Properly cured cannabis stored in a cool, dry place has a shelf life of about a year. Around that point, weed will begin to lose flavor and potency, and may even develop mold that could be harmful if smoked. And even if that batch isn’t harmful, it still won’t feel very good.

In this article, we review how to tell if your weed has gone bad, how old weed might affect you, and how to keep your weed fresh going forward.

How to Tell Weed Has Gone Bad

We have five senses, so let’s put them to work.

The easiest way to inspect your weed for freshness is to give it a close look. Fresh cannabis is a vibrant green color, sometimes with streaks of purple, and fine hairs that turn orange or amber. If these colors look washed out at all, it’s hopefully because they are covered in cloudy little trichomes. However, if that bright green has faded — or worse, turned to a muddy brown or yellow — then you’ve got some expired weed on your hand. Best to leave it alone.

The smell and flavor of a given cannabis strain come from the terpenes and flavonoids that develop during the curing process. But even the most patient cure cannot make weed impervious to the ravages of time. 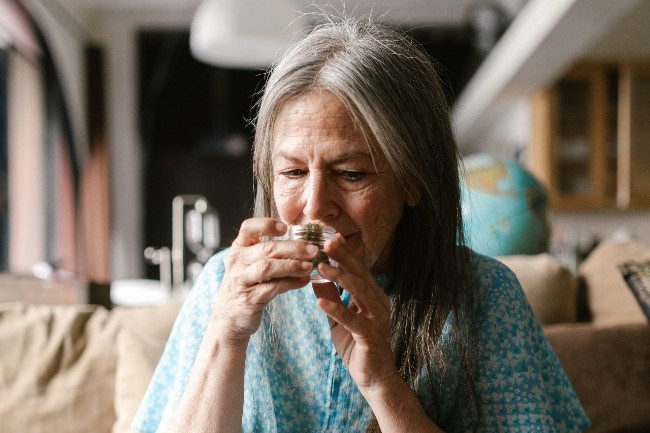 If your cannabis has an odd smell or no smell at all, there is a chance it has gone bad. photo credit

Cannabis that has little to no smell will probably also have little to no taste. Not only will it be bland to smoke, but terpene degradation may warp the entourage effect, dulling the high you experience.

Fresh cannabis buds are spongy without feeling dry. As cannabis ages, it will likely lose moisture, giving it a scraping, abrasive texture. While healthy buds are gently pulled free from their malleable stems, old weed feels brittle, with buds crumbling off the stem.

The biggest threat old weed poses to you is mold. Moldy cannabis won’t hurt you the way expired food might, but a lungful of mold smoke is a lousy experience, and obviously not good for your lungs. The good news is that mold doesn’t hide well, so a close look should reveal any.

Mold presents in several different ways, so be careful. It may appear as irregular dark spots, or it could be a fine fuzz growing across the surface. What appears at a glance like trichomes could be powdery mildew.

If looking this closely is difficult, smelling it may be a better indicator. Mold often smells acrid or sour, curling up the corners of our noses or mouths. 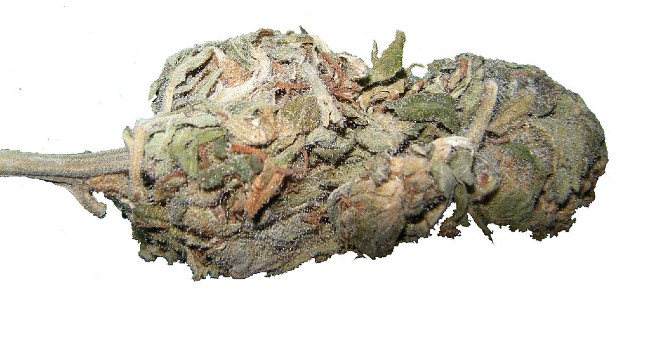 Admittedly, some strains of weed smell pretty pungent themselves but trust your body to raise the alarm when it smells something dangerous. If you have any misgivings or just a “funny feeling” from some mysterious bud, don’t smoke it.

One commonly reported side effect of inhaling mold is nausea and diarrhea. If you’re experiencing such issues commonly when using cannabis it’s worth looking into your storage practices and the age of your bud.

Finally, it’s important to note that certain mold or fungal organisms can lead to cancer - aflatoxin is one such example. Properly storing and avoiding old buds will decrease the chance of exposure to such compounds.

The Effects of Expired Cannabis

Generally speaking, sativa strains make users energetic, while indicas put people on the couch. Those lines have been blurred in recent years through crossbreeding and the closer study of terpene profiles. One certainty is that old weed, regardless of the strain, will definitely put you on the couch, and probably put you to sleep.

One suggested reason is that the primary psychoactive ingredient in marijuana, THC, is only one stage in the development of cannabinoids within the plant.

Cannabis plants are harvested when THC content is at its peak, but left “on the vine,” THC will develop into CBN, a cannabinoid that is less psychoactive, but thought to be great at inducing sleep. For this reason, CBN has become the subject of sleep science research, and has even come available for purchase in some markets. 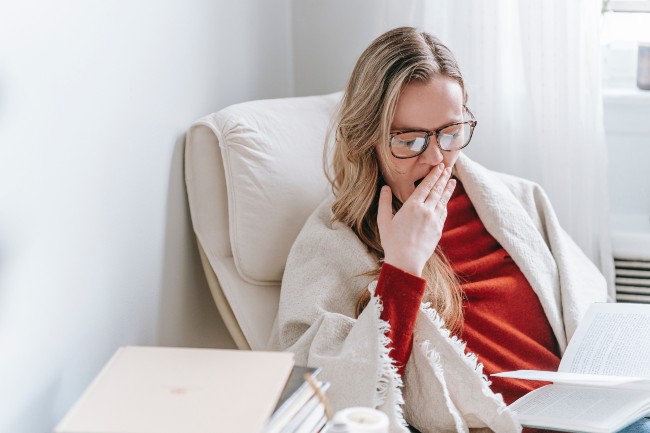 CBN is thought to have more sedative effects than THC. photo credit

A patient curing process drastically slows the development of CBN, leaving your stash of cannabis rich with THC. But curing does not stop this process altogether, and while cured cannabis can stay fresh for about a year, over time those cannabinoids will continue to develop and degrade. Therefore, older cannabis is often higher in CBN.

However, the jury is still out on how CBN makes us tired. While some early research and anecdotal evidence has pointed to elevated CBN levels equating to sleepy weed, further investigation has been mixed on the cannabinoid’s exact role.

CBN alone does not appear to make people sleepy, but degraded or old cannabis certainly does, and the exact reason is unknown. It may be a specific interaction between CBN and THC that causes the effect, or that cannabis with high CBN naturally has other qualities (such as specific terpene profiles) that are sleep-inducing. The consensus remains, regardless of the strain, older cannabis will affect consumers more like a couch-locking indica.

How to Store Cannabis Properly

Most of the problems addressed here can be prevented by more effectively storing your cannabis long-term. Of course, a patient curing process will prepare your cannabis for long shelf life, but the container and location it's stored in will also have an effect.

Light and temperature are your primary adversaries when storing weed.

Light, especially UV light from the sun, will degrade cannabinoids and terpenes faster than anything — with heat coming in a close second. Always store your cannabis in a cool, dark location, and away from any appliances that may emit heat, like a stove or a computer.

Air and moisture are the other two factors to consider. Cannabis flower can be vacuum sealed for very long-term storage, but if you don’t have the hardware lying around, any jar with a rubber seal will do. A little air exposure when you reach for your weed is normal, but if air is leaking around your buds 24 hours a day, it’s going to go stale quickly.

Weed does not technically expire, but like all plant matter, it can degrade, go stale, and the window for use can ultimately close. The quickest way to tell if weed has gone bad is to take a close look, and maybe a close smell.

Mold is the most critical threat without being too critical. Moldy weed won’t harm you, but it will taste atrocious and you will likely cough it up. Check for mold by looking for dark spots throughout the piece, or cottony growth along the surface. If you’re still not sure, give it a good smell. 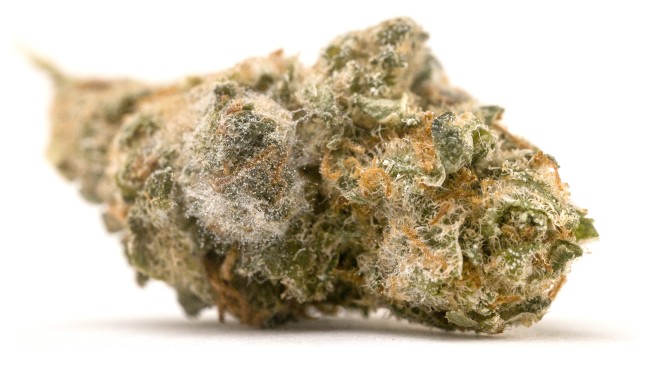 Checking the appearance and smell are the best way to determine if your weed has gone bad. photo credit

Old weed smells a bit like hay, or dry grass, and mold will likely smell acrid or repulsive. Good weed is skunky, that’s true, but bad week is beyond skunky, and will probably set off a small alarm in your head that says, “don’t put this in your mouth. If you are still unsure after this examination, don’t bother trying it.

The best thing you can do to prevent weed from going bad is to properly prepare it for long-term storage with a patient cure, then store it in a container that will keep it fresh. Wide-mouthed mason jars are the most common option, preferably with a latching, rubber lid. Not only do these jars seal well, but glass tends to make a better container than plastic or metal because the latter two will impart their residual smells and flavors over time. Failing that, sealing and locking containers may be purchased specifically for cannabis, as well as odor-proof bags.

Will my weed get moldy?

It could, yes. Weed will grow mold if it is cured or stored improperly, particularly in humid areas. The first thing you can do to prevent mold in your weed is to cure it for several weeks. If you got your weed from somewhere else, store it in an air-tight container away from light or heat sources.

Does weed get stronger with age?

Briefly yes, then no. Freshly harvested cannabis will continue to develop cannabinoids during the drying and curing processes, but its potency will have a ceiling defined by its genetics. After that peak potency has been reached, it will inevitably decline over time. Again, the curing process can slow this degradation, but no weed is impervious to time.

Why does my weed smell old?

Cannabis loses flavor and potency, over time. Especially, if it is not properly stored in a cool, dry location, and sealed as tightly as possible. Air, light, and heat all degrade weed, from the plant matter itself to the cannabinoids and terpenes within. If your weed smells old, it’s probably well past its prime. Smoke at your own risk.

How can you tell when weed has gone bad? Keep the conversation going in the comments below! 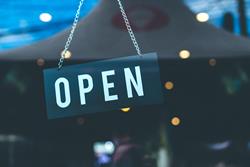 How is the COVID-19 Pandemic Affecting Dispensary Openings?

How is the COVID-19 Pandemic Affecting Dispensary Openings? 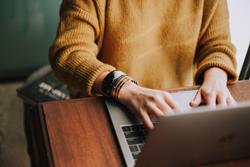 How to Buy Weed Online Legally

How to Buy Weed Online Legally