It seems like every week, a headline quietly announces yet another major company, automaker, or sports team getting into competitive gaming. Celebrities from Michael Jordan to Drake have invested in Esports brands. Both the NBA and FIFA organize digital seasons and events alongside their physical ones. Last year, the Street Fighter V EVO world championship aired on ESPN2. Even once-humble farming simulators have turned competitive. Like cannabis, a scene formerly sequestered to basements is now hitting the mainstream.

As gaming culture emerges from of the basement, it is determined to bring its good green pal along for the ride. Despite an incredible spectrum of gender, class, race, and political views represented in the professional gaming world, cannabis unites competitive gamers of all demographics.

Seeing the Scene in Action

At Frosty Faustings XI, the eleventh iteration of greater Chicagoland’s winter major fighting gaming competition, the smell of ganja was never far from the venue space. Though many exit doors at the venue were locked to discourage smoking, one or two seemed to always be snuck open or ignored by staff, thus creating a de facto sesh spot. One could duck out a back door at almost any time during the competition to catch a glimpse of star players, commentators and average joes alike consuming cannabis in communion. 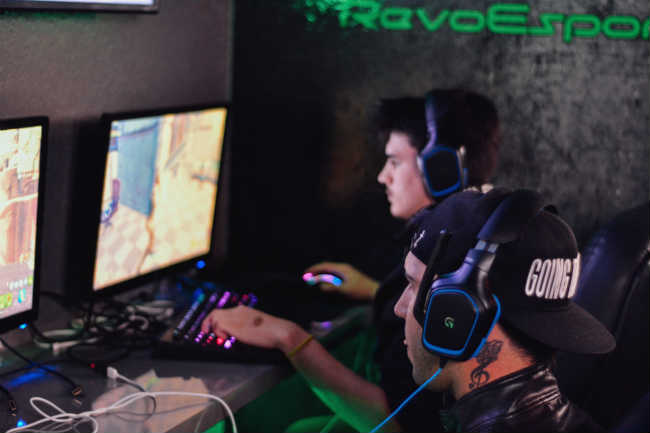 Cannabis consumption in pro gaming is more common than you might think. photo credit

Players shared strategies, bonded and vented about their wins or losses of the weekend between puffs. Cannabis seemed as natural to the scene as grabbing a beer. None of this was sanctioned in any way by the event, staff, teams or organizations present, and yet no one seemed much concerned (possibly because Chicago is primed to go recreational by the end of 2019).


Many a star player could be seen smoking in their team jersey, without a single furtive glance to check for a coach or tournament official.

As cannabis acceptance advances, the Fighting Game Community (FGC) is probably safe in assuming cannabis as a norm. However, the FGC sprung mostly from grassroots efforts, and though it has grown to the arena of large-scale, professionally produced competitions, it has few, if any, central governing bodies. It is up to each individual event or pro-tour to set and enforce regulatory rules, and there is little incentive to strictly police players for cannabis. However, competitive gaming isn’t just one community, it’s many separate communities existing in parallel. As much as fighting games have grown in public profile, they are still one of the smaller areas of competitive gaming, relative to other scenes like League of Legends or Fortnite. What the FGC takes for granted may be a bit different for other Esports communities.

Who Cares About Cannabis Use in Esports and Why?

Traditionally, the topic of banned substances in sporting pops up most in relevance to two things unconcerned with actual competition: injury and gambling. In major league sports, insurance companies don’t want to be liable for someone’s drug-related injury amidst an already dangerous landscape, and bookies need to be able to set reliable odds. Previously, neither industry had too much at stake in competitive video gaming, and the topic of banned substances had been rather niche, and mostly speculative. With money now flowing into competitive gaming in historic amounts, that’s started to change. 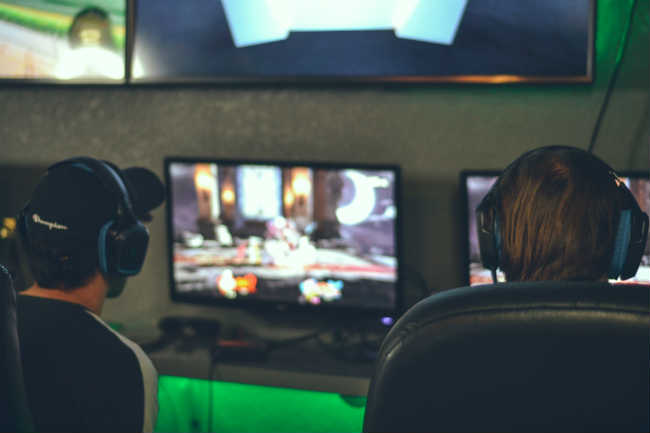 It will be interesting to see how Esports reacts to substance usage as the industry grows. photo credit

The topic was recently thrust into the spotlight after a popular Counter Strike: Global Offensive player Kory “Semphis” Friesen admitted in an interview that his entire team used Adderall during competition. The ESL, the oldest and largest established gaming league, made a statement on banned substances and announced it would begin random testing on-site at future events in response.

The bulk of the discussion on banned substances in Esports has revolved around the use of stimulants and other performance enhancing drugs, but cannabis was also included on the list of banned substances.

Despite upsetting more than a few players, the policy is a bit liberal by typical sports testing standards. The ESL bans cannabis consumption during events, but cares little about use before or after. Instead of blood or urine tests, the ESL utilizes a saliva drug test, which is only sensitive to cannabis use within the last 24 hours. Should a player choose to celebrate their victory after an event is finished with a nice joint, they can spark with impunity.

Additionally, substances that are banned by the ESL but are needed medically by the player (including Adderall) are allowed with a doctor’s recommendation. It remains unclear if this extends to cannabis use, but as medical cannabis accessibility grows, it is likely cannabis will be granted a similar exemption. As more official school and national gaming teams emerge, it is likely players on such teams must abide to the stricter guidelines of these institutions – just as, in addition to NCAA rules, many collegiate athletes must abide by the overarching rules of their specific colleges.

The World of Tomorrow

So long as misinformation and stigma reign, cannabis will stay an easy scapegoat. Those that can blame it to their advantage will continue to do so, but Esports organizations of the future are in for a battle with their players if they choose to pursue a restrictive cannabis policy. It is unlikely that professional competitive gaming will ever successfully remove cannabis from the culture. That isn’t to say they won’t try in the meantime, however.

What are your thoughts on cannabis usage in Esports? Comment below!