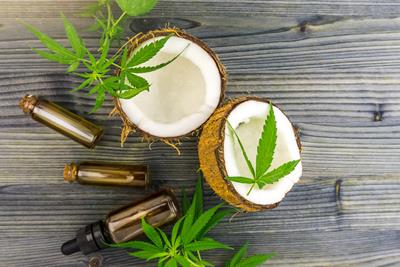 In recent years, coconut oil has received a considerable amount of press detailing the health benefits of the product over alternatives such as butter or olive oil. And cannabis users can add another accolade to the list – it’s great for cannabis infusions. Not only does it offer a healthier option than other oils and fats, but it may actually absorb and deliver cannabinoids more effectively.

In this article, we review the benefits of using coconut oil for cannabis infusions, detail some chemistry behind the process, and offer a simple recipe for cannabis-infused coconut oil.

The active medicinal ingredients in cannabis are compounds called “cannabinoids,” and these cannabinoids can be infused into food with one small catch – they are not soluble in water. Other compounds like salt and sugar dissolve in water like Kool-aid, but cannabinoids are fat-soluble, meaning they only dissolve in fats.


This is why edible infusions often begin with butter, olive oil, or in our case, coconut oil. But while all of these fats are technically interchangeable for the purpose of cannabis infusions, they are not all created equal.

Usually when cooking, oils are chosen for their flavor, but when cooking with cannabis, the primary purpose of the oil is to absorb cannabinoids. For this reason they are sometimes referred to as “carrier oils.” So, oils that have a lower absorption rate will carry fewer potential cannabinoids, meaning more weed is being wasted. 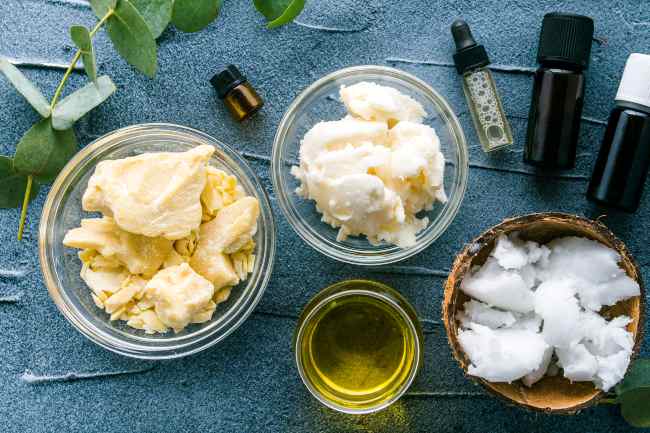 Oils, butters, and other saturated fats bind to cannabinoids because they are fat-soluble. photo credit

The metric indicative of this absorption rate is saturated fat. Olive oil is about 15% saturated fat. Butter clocks in higher at over 60%, but coconut oil is between 80-90% saturated fat, making it the best option by a mile for those who want a dense, cannabinoid-rich oil in their dish. Of course, coconut oil also makes a better topical than smearing butter or olive oil on your skin, so it offers more options for infusion as well.

Saturated fats don’t enjoy very good press regarding health risks, but there is some nuance to this argument. Most of the saturated fats we talk about are categorized as “long chain fatty acids,” including myristic acid and palmitic acid, found in milk and palm oil respectively.

These long chain fats are difficult for the body to break down, in part because only a few enzymes in the body are capable of it. The result is that most of these fats are stored in the body as fatty tissue, where energy can be drawn from later.

Conversely, coconut oil is composed of “medium chain fatty acids” like lauric and caprylic acids. These medium chain acids are much easier for the body to break down, and most are absorbed in the liver and put straight to work producing energy.

Ingesting raw cannabis will have no effect on the user, so those cannabinoids must first be “activated.” The reason is that the psychoactive THC in raw flower actually begins as THCA (tetrahydrocannabinolic acid), the molecular precursor to THC. The compound is converted to THC when the carboxylic acid chain is broken from the compound with heat in a process called “decarboxylation” or “decarbing.” 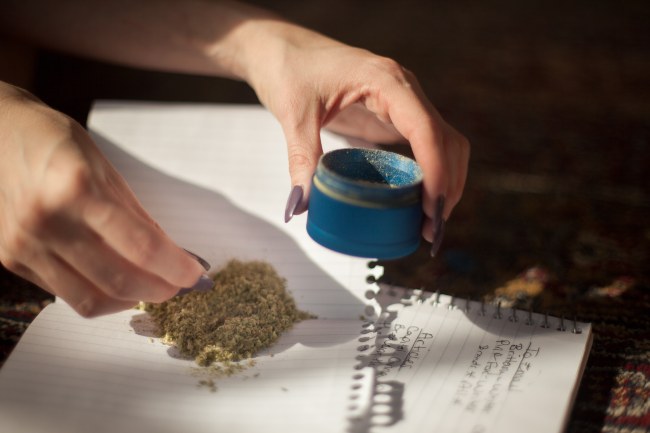 Prepare to make your infused coconut oil by grinding your weed down in a grinder. photo credit

Usually this all happens in an instant when the flower is put to flame. When cooking, it can happen one of two ways: ground flower can be spread over a baking sheet and baked at 230° F for about 30 min, or it can be simmered in oil at a similar temperature. For this recipe, we will decarb the cannabis directly into the oil we are infusing.

1. Combine the coconut oil and ground cannabis into a saucepan and bring to a low simmer.

-If possible, a double boiler is recommended by placing a heat-proof bowl over a pot of boiling water. This puts more distance between the oil and the heat source, reducing the danger of scorching, which will not only harm the flavor, but also damage the cannabinoids.

-The mixture must exceed 230° F to decarb the cannabis, but should not exceed 245° F. Sugar thermometers are designed to rest in saucepans to measure temperatures like these.

2. Let the mixture simmer for 2-3 hours, stirring occasionally. Cannabis, decarbed in the oven beforehand, only needs to simmer for about 30 mins.

3. Carefully strain the mixture through a cheesecloth or fine mesh sieve.

-It may be tempting to press or wring the remaining drops through the filter, but this often presses through more plant matter than oil, so squeeze at your own risk. Discard the cooked, oily cannabis.

-Infused coconut oil will remain fresh for one month in the refrigerator. 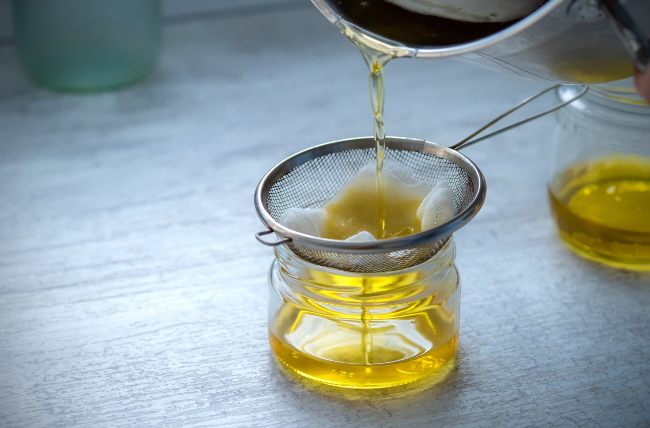 Pour slowly and carefully because the oil will be hot and you don't want to miss a drop. photo credit

Our recipe calls for an eighth of cannabis, but this can be scaled up to a quarter ounce for a more potent final product. Remember, there is a limit to how much cannabinoids can be absorbed by the oil, so adding more than a quarter ounce may amount to wasting weed.

Infused cannabis oil can also be used to create your own topicals.

What are the Benefits of Cannabis Infused Coconut Oil?

Coconut oil has a higher concentration of saturated fat than other alternatives, meaning it absorbs and holds more cannabinoids. It is also healthier than many other oils because it is composed of more medium-chain fatty acids (as opposed to long-chain fatty acids) which are metabolized more easily.

What Kind of Oil Do You Use for Cannabis?

Cannabis can be infused into almost any oil such as olive oil or butter, but coconut oil can carry more cannabinoids and is metabolized more easily, so less fat is stored in the body.

What Type of Coconut Oil is Best for Infusion?

Do you use coconut oil for your cannabis infusions? What do you make, and why? Tell us in the comments below! 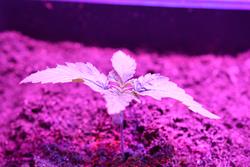 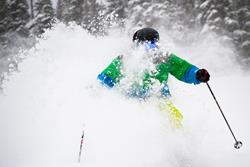 How to Include Cannabis on Your Next Colorado Ski Adventure

How to Include Cannabis on Your Next Colorado Ski Adventure