A clear majority of Americans are on board with regulating and legalizing recreational marijuana use. More than half of the country already allows some form of legalized cannabis. And states with just medical legalization or both medical and recreational legalization are generating much-needed revenue and taking control over the black market.

Many states are seeing the benefits and are following suit. Let’s take a look at which states are closest to achieving marijuana legalization and reform right now.

Big strides are being made in the Land of Lincoln. Last year, the state’s medical cannabis program was extended until at least July 2020 and both PTSD and terminal illnesses were added as qualifying medical conditions. And just last month, two identical bills were introduced, one in the House and one in the Senate, to legalize recreational marijuana and set regulations within the state.

SB 316 and HB 2353 would legalize the possession, grow and purchase of limited amount of marijuana for adults 21 and older. The state would license and regulate businesses to cultivate, process, test and sell cannabis to adults and create and enforce health and safety regulations.

Those already in the recreational space are looking forward to the opportunities and expansion possibilities.

Maryland established a regulated and taxed medical marijuana market in 2014. But there’s been slow progress on the medical front due to a disproportionate amount of diverse businesses and lack of effort to actively seek to achieve ethnic and racial diversity. It’s delayed the process and dispensaries are just now set to open later this year.

In terms of recreational legalization, the Maryland Medical Cannabis Commission expects availability by the end of summer 2017. (Hopefully, the medical program’s slow rollout isn’t an indication of how things will go.) Companion bills, one of which tackles regulation and the other taxes, are currently being rolled out in the House and Senate.

SB 989 / HB 1185 would allow adults to possess up to one ounce of cannabis and grow up to six plants. Unsurprisingly, it would license tightly regulated businesses to cultivate, process and sell cannabis, including the implementation of a “craft cultivator” category for small businesses. The bill would also designate responsibility to the Comptroller of Maryland for licenses and ruling and the Department of Agriculture for licensing and regulating industrial hemp cultivation. Cities and towns would then have the authority to limit location and number of cannabis establishments.

SB 927/HB 1186 would set a $30 per ounce excise tax (targeted toward cultivators) and a 9% sales tax, which is the same tax rate on alcohol. The bill goes on to break down revenue and profits to be allocated for community school programs (50%), substance abuse treatment (25%), workforce development programs (15%) and combating impaired driving (10%).

The outlier of the group, Delaware does not have a voter initiative process. That means advocates have had to push hard to urge lawmakers to introduce a bill for recreational legalization. On March 30, 2017, the Delaware Marijuana Control Act (HB 110) came into the limelight with backing from 14 legislative sponsors. It would allow residents 21 and older to purchase up to an ounce of cannabis with dozens of stores authorized to sell marijuana that is manufactured at a variety of Delaware grow operations. Considering 61% of residents support the state’s implementation of the reform, it’s up to them to show support. It also needs traction from a majority of legislators in the General Assembly since it will establish a new tax.

On January 17, 2017, the Pennsylvania Health Department released applications for grower/processor and dispensary permits. In late June, permits for 12 grower/processors and up to 27 dispensaries will be approved, with a second round to follow later. Within the state’s existing medical marijuana licensing program’s six regions, each one will be issued two grower/processor permits. And the 27 dispensary permits will be issued in specific counties, each of which is allowed three locations—the first one in the assigned county and the additional locations within the region. It’s big news, considering lawmakers just approved medical marijuana last year are working on rolling out and establishing the program.

Legalization hasn’t received enough support quite yet. They haven’t been addressed in Judiciary Committee meetings or passed by the Public Health Committee. But the issue won’t go away anytime soon considering nearly 63% of Connecticut residents are in support. Plus, it’s estimated that a legalized market could bring in anywhere from $45.4 million to $104.6 million a year in revenue.

Hot off the presses of last year’s bill failure, a new bill has been introduced to create a medical marijuana program. With 10 co-sponsors and advancement from the Legislature’s Judiciary Committee, the LB 622 is off to a promising start. The fine details would permit manufacturers and distribution centers to provide medical marijuana to patients suffering from 19 different medical conditions. However, the bill stipulates that patients suffering from seizures, anxiety or other approved illnesses can only consume cannabis via pills, oils, liquids, lotions and vaporizers—no smoking or growing.

The Vermont Senate may have passed S 241 last year to legalize and regulate marijuana. But it didn’t get through the House. Advocates aren’t giving up, though. This year, the House Judiciary Committee leadership introduced H 170 which would eliminate penalties for adult possession and growing. It would remove civil and criminal penalties for adult possession of up to 2 ounces of marijuana and for the cultivation of a total of two mature plants and seven immature plants.

But House leadership pulled H 170 before headed to a vote on the floor due to a shortage of votes. Proponents are optimistic that the bill will return to the floor and that it will continue to the Senate. What’s the issue? The bill essentially says that you’re allowed to have it, but there’s no place for you to legally get it. Some say it may just reinforce the black market instead of ensuring a safe product is being delivered legally like the tax-and-regulate market does in other states. The slow advancement only leaves hope is for a 2018 passage. 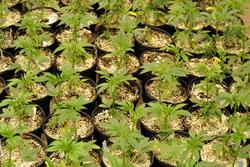 Grow Your Own: Recreational Marijuana Cultivation Laws for CA, NV, MA & ME

Grow Your Own: Recreational Marijuana Cultivation Laws for CA, NV, MA & ME