2018 is here and the latest and greatest trends for the New Year are being set in stone as we speak. But one trend finds itself carrying over from 2017. That trend is flavored distillate. Flavored distillates have been rapidly gaining in popularity for quite some time now and we’re excited to bring you a review of one of the newest product lines from Organa Brands, the O.penVAPE ISH.

While canna-connoisseurs and aficionados have been long-catered to by cartridge producers in the form of high-end products with cannabis-derived terpenes and tastes, novices and beginners (and fans of more “ejuice-esque” flavors) alike have been asking for flavored distillate.

O.penVAPE has answered the demand from consumers with their own unique line of flavored distillate pens, complete with both a pen and cartridge. Conducive to their name, ISH pens come in indica (I), sativa (S) and hybrid (H) varieties and feature three distinct flavors: Bavarian Cream (indica), Raspberry (sativa) and Watermelon (hybrid).

Now that we all know what the O.penVAPE ISH is, let’s take a closer look into our team’s review of the products.

From an aesthetic standpoint, the appearance of the ISH pen is very modern and sophisticated. As with any O.penVAPE product, the design has been thoughtfully cultivated and appeals highly to cannabis consumers. Even better, the ISH pen’s design is very subtle and discreet, allowing new or wary consumers to enjoy their cannabis under the radar. This is especially important for new consumers who may feel out of place identifying with “stoner culture.”

The ISH pens are also very small and can be held in the palm of a hand without anyone noticing, making them ideal for any on-the-go-consumer.

We also found the mouthpiece to be an improvement from the regular O.penVAPE cartridges. If you’ve ever purchased one, you may know the plastic mouthpiece can sometimes detach in your pocket and create a bit of an annoyance factor. The ISH pens have a one-part mouthpiece and store great in your pocket – almost all of our reviewers commented on this aspect of the design.

In addition to the elements mentioned above, our review team also enjoyed the silver coloring on both the pen and cartridge. Combined with their small profile and relative ambiguity, the sleek, silver finish really adds an element of refinement to the pens. The ISH pens would effortlessly blend in at a dinner party, gala or any other formal event just as well as they would on your friends couch. From a novice’s perspective, the versatility in the ISH pen’s design is certainly amongst the top percentile of products.

Retail price varies between dispensaries for the ISH pens, but Organa Brands has suggested an MSRP of $20 for their 250mg pens and $30 for their 500mg pens. These prices are pretty competitive with other flavored distillate products and not too expensive for something with non-cannabis-derived terpenes.

Because of their above average usability and performance, the ISH pens are definitely a good choice in terms of value. Some flavored distillate pens are cheaper, but in our opinion the performance and consistent vapor production is worth the extra couple bucks.

Keep in mind the ISH cartridges are not reusable (the batteries are rechargeable and reusable though) so if you’re looking for a refillable product then these may not be for you. That said, the quick and effective pens are perfect for anyone needing to consume with ease and have high value in portability and functionality. 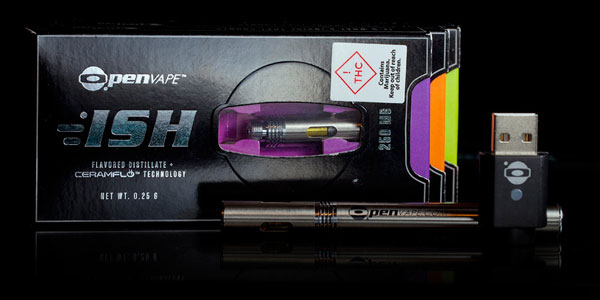 As fans of true cannabis taste, we have to admit that our team had mixed feelings on trying the flavored options of the ISH pens. However, after sampling each flavor (Bavarian Cream, Raspberry, Watermelon) we were pleasantly surprised by the results. For your edification, we’ll go over each flavor.

Perhaps the most intriguing option of the three flavors, our review team didn’t know what to expect of the Bavarian cream. And aside from a few cream-filled donuts in the past, our palates didn’t really know what flavors to anticipate.

Thankfully, after a few pulls of the pen we were all enjoying the sweet, flavorful vapor of the indica-laden Bavarian cream. The flavor is strong, robust and has a nice velvety-smooth finish. Bavarian cream is definitely a flavor you don’t see often in vape cartridges and has an appeal to those who are interested in something equal parts savory and sweet.

Moving onto the sativa variety of the ISH pens, the raspberry flavor was quite enjoyable – although it might come off a bit sweet to anyone who isn’t fond of sugary or candy-like flavors. Taking a puff from the raspberry flavor provides a quick burst of sweetness that takes hold of the palate almost instantly, making it a great choice for beginners because the taste is not as intimidating as cannabis.

Out of all three flavors, the watermelon was our personal favorite. Representing the hybrid variety of the ISH pen, the watermelon flavor is a classic taste that reminds us of many sweet treats and desserts we once enjoyed as kids.

Same with raspberry, the watermelon flavor is inviting for both novices and experts alike who want to experience a different taste in their cannabis products. 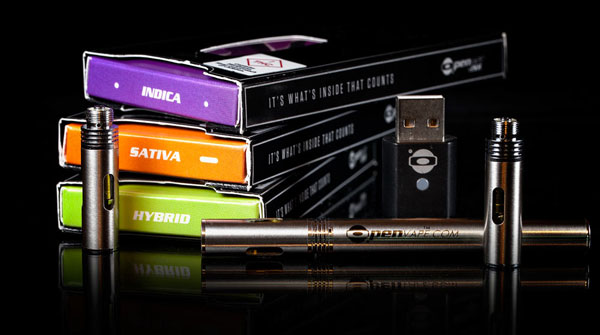 As mentioned above, the ISH pens come in indica, sativa and hybrid varieties. Since, as we all know, indicas, sativas and hybrids all produce different effects, we’ll break down our effects category to accommodate a review for each.

The effects from the indica pen were on par with what you might expect from smoking an indica-dominant flower. A mellow high slowly creeps up while an enhanced state of euphoria sweeps over your entire body. The indica ISH pen is perfect to unwind after a long day or take the edge off during stressful situations.

Because there are no cannabis-derived terpenes, the high did feel slightly different than consuming flower or full-spectrum concentrates. This may be an issue for connoisseurs or anyone looking to experience a true entourage effect from terpenes.

That being said, fans of indicas will almost certainly enjoy this variety of the ISH.

We found the sativa ISH pen to be the truest high of all three varieties, offering an upbeat high that had us motivated and energized for the better part of an hour. Be wary though, this pen comes very close to a racy high so if you aren’t a fan of heavy sativas you may want to stick with the indica or hybrid option.

Nevertheless, the sativa ISH pen was a heavy hitter and came on strong. The high concentrated itself on the head and mind, but as the time passed we began to feel mildly sedative properties extend throughout the body.

The hybrid ISH pen provided a nice, clean high that came on pretty quickly to the body and lasted for several hours. While not extremely motivating, the high was very relaxing and calming and allowed us to stay productive throughout the day.

Fans of both indica and sativa will enjoy the hybrid ISH pen as it touches on several aspects of each species. This pen would be great for beginner consumers as it provides mild euphoria with the ability to ramp up effects with every puff.

We really enjoyed our experience with the O.penVAPE ISH. They are a great way to consume in a time crunch or on-the-go and are truly welcoming to new or beginner consumers. And because they have three different flavor and effect profiles, there truly is a pen to suit everyone’s preferences.

If you’re a fan of flavored distillate or simply want to enjoy some fun and tasty flavors, stop by your local dispensary to pick up a couple cartridges!