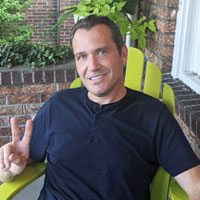 Jeremy Bamford founded PotGuide in 2013 as a resource for cannabis enthusiasts visiting Colorado to explore the first legal recreational cannabis market in the U.S. At the time there was very little information available for visitors regarding this industry. Jeremy understood that a successful implementation of recreational sales in Colorado was crucial for this industry to have the chance to grow and mature. All eyes were on Colorado when recreational sales began in 2014.

He also recognized there was a lack of resources for the new cannabis businesses popping up to promote and market their goods and services. Starting with basically no budget and working out of his bedroom in the evenings and weekends, Jeremy built the initial version of PotGuide in the Summer of 2013. At the time it was a simple 5-page website. Using his knowledge and over 20 years of experience being an active member of the cannabis community in Colorado, Jeremy wrote all the content, coded the entire site from scratch and created all the branding and marketing materials. The site went live in September of 2013.

Initially the site had minimal visitors, but as 2014 approached, more and more media and press started using the information Jeremy had written and compiled as a resource and reference for their own articles. As a result, PotGuide became a trusted resource and expanded its content and audience each month.

By the end of 2014, Jeremy decided to resign from his position as a Senior Software Developer to pursue building PotGuide full-time. The timing was great as he stumbled upon a new start-up accelerator program in Boulder that was focused on ancillary cannabis businesses. Jeremy applied to CanopyBoulder and PotGuide was accepted as one of 10 companies in the inaugural class. During this time PotGuide expanded its geographical reach to include content and directories for Washington and Oregon. PotGuide completed the program in 2015 and had just 3 full-time employees.

Raising funds in the cannabis industry is always a challenge, especially in 2015 as a media company. And while just minimal funds were raised (60k), Jeremy remained focused on providing the best, most accurate information about the industry wrapped in a great end user experience. Jeremy and his co-workers were driven by a passion for the plant and a desire to provide accurate, timely information. It was this passion and the contributions of many great people that PotGuide grew bigger each month.

Being consumer focused was always a core principle of Jeremy’s and is what he instilled in PotGuide. An unofficial slogan at PotGuide is we’re from the industry, for the industry.

Over the years PotGuide has continued to grow organically and the content and messaging has resonated with our visitors. PotGuide now has coverage for over 40 states and all of Canada with content and directories that appeal to locals as well as tourists.

Jeremy’s hope is that every visitor to PotGuide learns something new about this great industry and amazing plant, and will value and pass that knowledge along to others.

Jeremy’s career has been rooted in both business and technology. Before founding PotGuide, Jeremy enjoyed successful ventures as a Business Analyst with Wyndemere Inc., Technical Producer with CNET, Senior Software Developer at Virtual Interface and running his own web-hosting company, Flatirons Internet. In the 15 years of work experience before founding PotGuide, Jeremy developed the necessary skills and expertise needed to not only create a business from the ground up but also establish, maintain and grow a diverse developmental environment and technical infrastructure.

Jeremy graduated from the University of Colorado Boulder in 1997 with a Bachelor of Science (B.S.) in Business Administration. During his time at CU Boulder Jeremy took advantage of the school’s study abroad program, traveling to the Netherlands to attend the University of Amsterdam. There, he learned about the country’s cannabis industry and gained valuable insight about legal marijuana that was years away from reaching the United States.

Jeremy resides in Denver and enjoys living the Colorado lifestyle. He likes going to shows at Red Rocks and zipping around Denver on his e-bike. He loves dogs and has a rescued German Shepherd and has been involved in fostering dogs waiting for a new home. He enjoys playing bass guitar, gardening and baking sourdough in his free time.