Delta-8 THC is an up-and-coming cannabinoid, praised for having effects similar to delta-9, but more subdued. As it is hemp-derived, delta-8 THC is also available in a wide range of states that delta-9 is not (though there are a select few places where the opposite is true; be sure to check local regulations). It’s a desirable combo that had the review team’s interest quite piqued: these were the first delta-8 edibles anyone on the crew had tried. The pressure was on for Delta 8 Hemp’s gummies to live up to all the hype we’d been hearing, so we put them to the test.

The gummies themselves are colorful and attractive, just a simple cube with a light sugar coating. The branding is a little more lighthearted, but generic. Overall the packaging is very straightforward, so no frills but also nothing unnecessary or complicated. We did note that the container isn’t childproof, and they are tasty gummies, so keep in mind to keep them locked up and away from children.

One thing that we really liked about the packaging is the scannable QR code that linked directly to testing results for the batch. Several reviewers noted that they’ve encountered a few of these before on other cannabis and hemp products that either did not work or were difficult to understand once you arrived at the website. That was not the case with Delta 8 Hemp. We greatly appreciated seeing a QR code finally work as intended for the consumer. Having quick, easy, and professional testing results readily available is a big plus in our book.

We sampled both the regular and sour variations of the delta-8 THC gummies, and both smelled sweet and inviting. Not pungent, but strong fruity notes that evoke the same salivating response as your favorite candies. One reviewer compared them to smelling just like sour candy straws. It’s slightly more of a sugary smell than a natural one, but if you are a candy eater, you’ll know what to have in mind. There was no noticeable “hashy” or cannabis oil smell often found in edibles either, making them a great option for those needing discretion.

These are some tasty gummies. Both the regular and sour edition were a good combo of juicy and fruity, the way you expect in a quality candy gummy. One reviewer specifically noted the favorable consistency. A lot of gummy edibles can be very chewy, and these weren’t. They have a soft biteable consistency that lead one reviewer to comment, “they seemed like a gummy I could snack on if they weren’t edibles.”

This is where Delta 8 Hemp’s  gummies really stood out. Everyone on the team reported noticeable effects, from both ends of the tolerance spectrum. There were some slight cases of the munchies all around, so be aware. However, for anyone looking to use cannabinoids to help with appetite stimulation, these could be a good option. 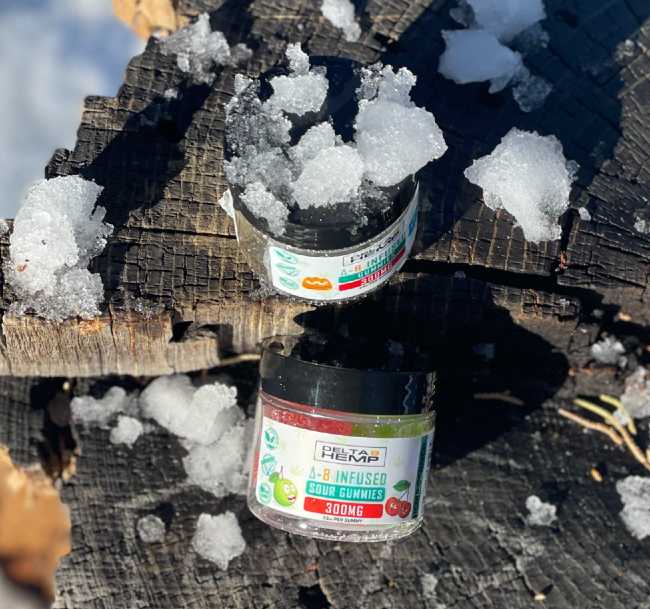 Some of our more experienced consumers reported a very calming, but pronounced, background lift and described it as, “deeply relaxing without going all the way towards sleepiness.”  Another, who had not consumed any cannabis products in over a week, reported an intense, but pleasant effect closer to delta-9 edibles.

That reviewer reported, “even though these gummies are delta-8, they still hit pretty strongly. Especially for people who don’t smoke a lot, or at all, start off slow.” Each gummy contains 33mg of delta-8. The reviewer mentioned it might be a good idea to start with half, or even a quarter. Another reviewer compared them favorably to delta-9 as well, but also noted a slight difference between these and a standard THC gummy that they couldn’t quite put their finger on, “it’s like THC and CBD all in one gummy.”

Across the board, our reviewers felt that these were an excellent introduction to delta-8 THC. Tasty and effective, they certainly delivered on their claims. We also appreciate a good deal, and at $19.99 for 300mg Delta 8 Hemp’s gummies have a generally more affordable price compared to other standard CBD or THC edibles. For both novice or experienced consumers, they are a great way to try delta-8 THC. We’ve noted elsewhere on the site that Delta-8 is often described as a midpoint between the two reigning cannabinoids, and these gummies hit that mark perfectly.

Click here to purchase Delta 8 Hemp 300mg Delta-8 THC Gummies and give them a try yourself!