Weeding Out The Stoned - NYC 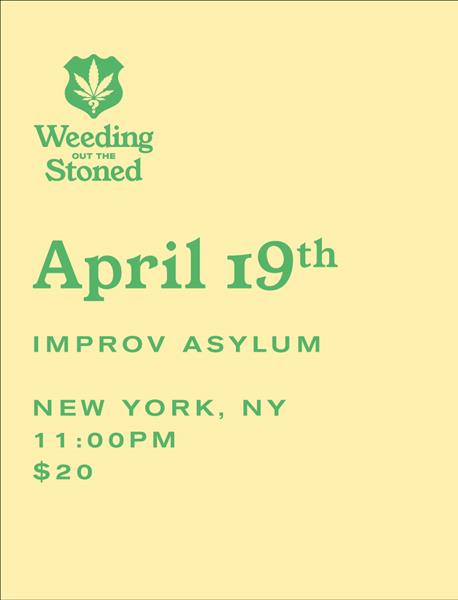 Weeding Out The Stoned - NYC

The Weeding Out The Stoned 4/2020 Tour is hitting the road this April through New England, The Northeast Corridor, and The Mid-Atlantic regions.

Eight comedians enter. All but one of them are stoned. “Officer” Alex Grubard administers field sobriety tests, seeks testimony, and plays mind games, judged by the audience, to find out who is high and who is the supply! It’s up to all of us to seek justice by weeding out the stoned.

Weeding Out The Stoned debuted in 2016 at Five Dollar Comedy Week and has been selling out shows to crowds across the country. Celebrating its 100th show at the end of last year, the show has created a serious buzz for audiences, selected for The Highlarious Comedy Festival, WOOtenany Comedy Festival, Montclair Mini Fest, Filmadelphia, and has been featured in USA Today, Philadelphia Inquirer, Billy Penn, Phindie, Brooklyn Vegan, Delaware News Journal, Denver Westward, and more.