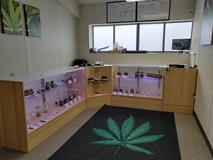 With quality at its highest and prices 30-40% less than MA (across all products); I will not think twice about making this my go to dispensary for a very long time. My only regret is it took me so long to realize- that Kind Guy is one of the best dispensaries on the East Coast!!!
Phil Camargo
Top notch service with a smile! Highly knowledgeable staff that make you feel as welcome family. Buds are definitely worth checking out.
Bboy TapeDeck
Love the vibe of this place. Prices and bud are really good hoping to make a trip up here again next month
justin boutin
Great flower and there concentrates are incredible Nice little shop hidden away in biddeford. Great daily specials and I love the weekend warrior deals! It's a must go for medical patients
Pedro Otero
These guys have been, without fail, consistently patient, helpful and well...kind. Though these guys are quite the hike for me (32 miles) they are worth it. The prices literally can not be beat nor can the quality. No sketchy maybe could be something a little ‘other’ than what is said, It Is what is said. And without fail, quality has been consistent. Kind Guy has become my number one spot to go for medicinal marijuana which I find far preferable to the caustic pharmaceuticals which have far more toxic side effects than marijuana or any of its constituents has ever been proven to have. The only reason the government has been so slow to legalize it, is because they are aware of its value, and the more value something has, the more control they want to have over it. The more control the government has over the commodities which are most helpful and beneficial to our health and well being? The more ability they have to actually control the quality of life of the people. So really, legalization of this plant is a result of the fact they simply had no arguments by which to contribute to ban this plant. No matter the study, over and over, it proved to be medicinal as oppose to harmful. Were it else wise, it wouldn’t have been legalized. The Kind Guy is on top of it, set up for business and looking out for the well being of their patients.
Julie Assmus