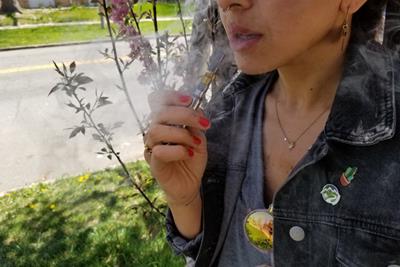 Live rosin cartridges have been multiplying on cannabis dispensary shelves across the country in recent years, so it’s worth delving into this new product to explain exactly what rosin cartridges are and why they have been growing in popularity among cannabis consumers.

Before we delve into live rosin cartridges, let’s start with what you’ll find in an average THC vape oil cartridge. When it comes to concentrates, the goal is always to extract the cannabinoids and terpenes from the plant material into a potent substance much stronger than buds alone. 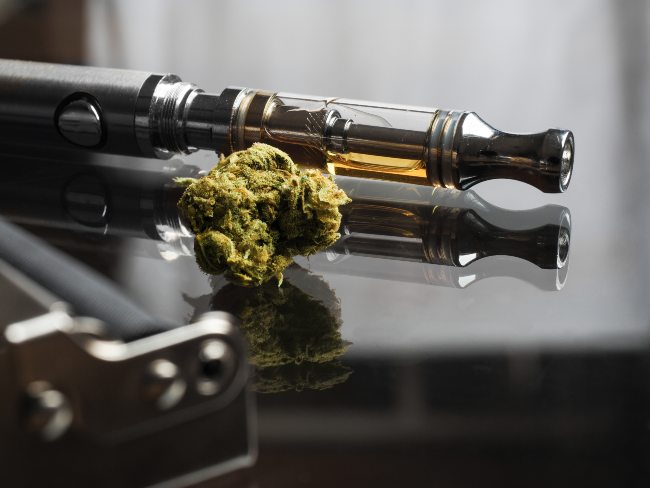 Rosin Cartridges are viewed as healthier because they are extracted without solvents. photo credit

The most common way to get THC and its friends out of plants and gathered all together in one place is a method known as hydrocarbon extraction. This is usually done with a solvent like butane. Butane Hash Oil (BHO) extraction is accomplished by blasting ground-up plant matter with a hydrocarbon solvent under high pressure.


The resulting sticky amber, brown or yellow liquid — containing all the plant’s resins and terpenes — is then dried and processed into concentrate. Ideally, nearly all of the solvent is removed from the final product using a process like Closed Loop Extraction, which separates and recycles the solvent using a vacuum pump. This is all done without exposing the product or solvents to the air.

As cannabis technology has advanced, there has been a push from consumers for more natural cannabis products like live rosin cartridges that don’t use solvents. The worry is that too much exposure to solvents, even at their extremely small percentages in most concentrates, could be harmful for your health.

This is especially the case for medical cannabis patients whose immune systems are already compromised. Such concern has led to the popularity of non-solvent concentrate techniques used in products like ice water (bubble) hash.

This method uses ice water and micron screens to concentrate trichomes and resin. Many consumers report that solventless concentrates like live rosin and bubble hash also taste better, and provide a full-spectrum experience. 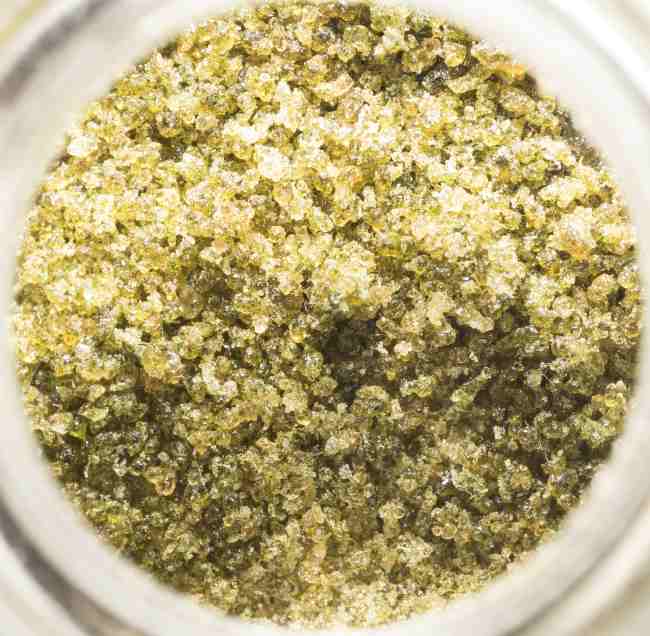 Bubble hash is another concentrate that is created without a solvent that provides a phenomenal taste. photo credit

Rosin is one of the newest techniques for extracting cannabinoids and terpenes into concentrate without involving hydrocarbon extraction. The new process doesn’t use chemicals at all, which is a huge bonus in terms of both product safety and ease of production.

Instead, the process that extracts rosin to create products like live rosin cartridges is a combination of heat and pressure. By using this method, producers can instantaneously extract a potent resinous sap from their marijuana plant matter, hash, or kief. This cannabinoid and terpene rich, full melt hash oil boasts a high THC percentage as well as a full flavor profile.

There are many benefits to rosin extraction over other concentrates, especially when it comes to live rosin cartridges. For producers, one of the biggest benefits lies in its speed. Traditional extraction methods to create vape cartridges like butane hash oil can take days to process and requires a lot of work to get right. Producers have to run tests to make sure that nearly all the solvent has been extracted from the final product as those chemicals can be harmful to health. 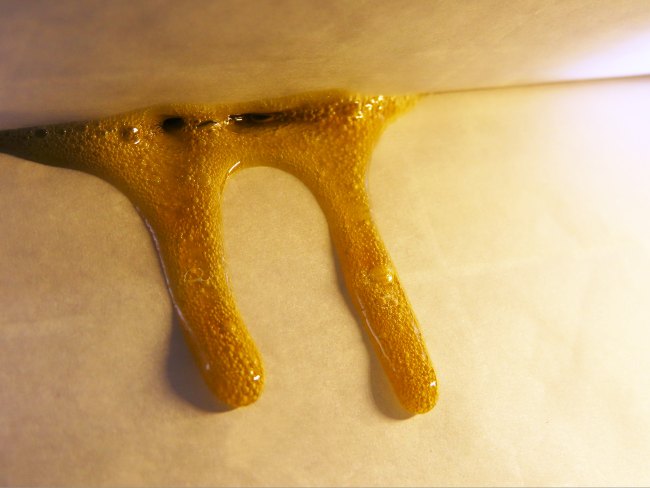 Rosin extraction is rather quick compared to other forms extraction and free of solvents. photo credit

After the heat and pressure is applied by a rosin press, a thick, gooey substance ranging in color from light yellow to amber extrudes from the plant matter. The resulting concentrate doesn’t require any additional cleaning or removal of chemicals afterwards. There has never been a faster, easier, and safer way to produce full-melt hash oil, which is why many producers are switching over to live rosin and building industrial sized presses to extract it.

For consumers, the main benefit is the lack of chemical additives and the full spectrum potency. Rosin and rosin cartridges contain the same amount of cannabinoids and terpenes as BHO concentrates like wax or shatter (though usually with a slightly higher amount of terpenes) but it’s produced completely naturally. It vaporizes just the same as other concentrates when hit with a dab nail or other high temperature surface and provides the same strength for the consumer.

As a full-melt hash oil, the easiest way to consume rosin is by vaporizing it at high temperatures, similar to wax or shatter. Rosin’s thick, viscous consistency makes it much harder to vaporize at the lower temperatures used by standard vape pens.

However, because rosin is so easy to produce and so popular for its flavor and potency, weed scientists went to work on creating a rosin cartridge that can be vaped at a standard vape battery temperature. Through a lot of fine-tuning and trial and error, producers have figured out how to cut the rosin’s consistency (usually through careful heat and pressure manipulation) without diluting its strength or quality. Because of this, live rosin carts can now be purchased that can be screwed into a standard THC vape oil pen for easy, on-the-go consumption.

Why Have Rosin Cartridges Become So Popular?

The convenience of a vape pen is hard to beat. They’re easy to use. They’re nearly odorless and discrete. They’re relatively cheap and you almost always have a range of brands and strains to try. There’s no need to buy any extra equipment beyond a battery and they slide into your pocket, purse, or fanny pack. When you combine the ease and functionality of vape pens with the potency of a live rosin cartridge, you’re checking all the boxes for many cannabis consumers. 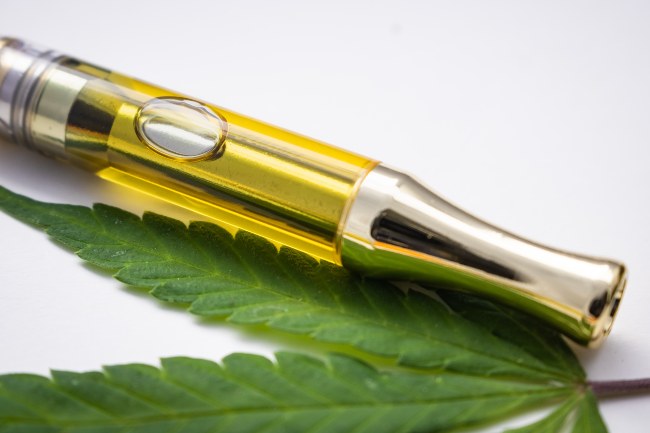 Rosin cartridges are full spectrum compared to other THC cartridges where terpenes and cannabinoids need to be added in later. photo credit

Additionally, rosin carts are a preferred option for the health conscious, because they contain absolutely zero chemical residue from any hydrocarbon solvents. Rosin cartridges are also stronger than a normal vape cartridge, which gives the consumer a much larger bang for a couple more bucks. Rosin cartridges are more likely to be naturally full spectrum, without having to have terpenes and cannabinoids added back in post-extraction like with regular vape pens. This means a much more pleasant and noticeable aroma and taste in a live rosin cartridge than you can find in a vape pen .

In conclusion, for a higher price than a normal vape pen, consumers are getting a strong, clean, and flavorful rosin cartridge that can still be used on their regular vape pen battery. This is why rosin cartridges are considered the most high-end, on-the-go cartridge that you can purchase.

The next time you’re at a dispensary with a little extra money to burn, consider buying a rosin cartridge to screw into your vape pen. Find out for yourself why live rosin cartridges are becoming a new favorite for cannabis consumers across the country.

Rosin Carts Get You High?

Yes, live rosin carts have the same high THC percentage as other concentrates. In many ways, rosin carts get you higher than a regular vape pen due to all the extra terpenes and cannabinoids. They also taste better and are more natural.

Is Rosin Safe to Vape?

Yes, live rosin carts are actually safer to vape than many regular vape pens because no chemical solvents were used in the extraction process.

What Are Rosin Pens?

Rosin pens are your typical THC vape oil battery, but with a cartridge containing live rosin, which is a full-melt hash oil extracted directly from the plant using heat and pressure, rather than being extracted from plant matter using butane or another chemical solvent. You use a rosin pen in the same way you would a vape pen. Rosin cartridges do cost a little more because you’re paying for higher quality.

Do Live Resin Cartridges Get You High?

Much like live rosin carts, live resin cartridges are full spectrum, concentrated hash oil, which means they have just as high a THC percentage as a normal vape pen. In fact, live resin cartridges get you more high in many ways than a normal vape pen due to all the terpenes and cannabinoids contained in the oil, giving you a more “full spectrum” effect.

Do you prefer rosin cartridges over other extracts? Let us know your thoughts in the comments! 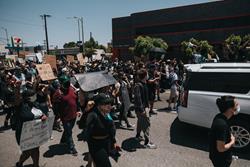 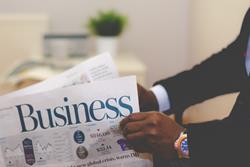