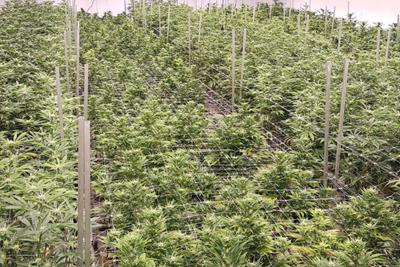 For part 3 of our Growing Weed in Washington series, PotGuide sat down with Travis Royce of Sugarleaf Farms to learn about the benefits of rock wool as a medium, the challenges of growing in wetter climates, and why Washington weed is so hyped, even in Wyoming.

Sugarleaf Farms is an indoor grow operation nestled in the northwestern Skagit Valley, an agricultural river valley bordered by the San Juan islands and the volcanic Glacier Peak and Mt. Baker. Sugarleaf farms is a part of Umbrella Industries, a cannabis conglomerate.

[Travis Royce]: Sedro-Wooley is very open to cannabis companies [there are six located in this city of 12,000 people.] Once they opened it up to growers they were getting a lot more tax revenue. They’re always kind to us…if someone complains about odor they…give us a chance to fix it. Inspectors are great and willing to work with us. I believe that’s why the original owners set up here.

[PB]: What are some of the benefits of growing weed in Sedro-Wooley?

[TR]: The city is happy with us and water and power out here are pretty inexpensive.

[TR]: We’re a big indoor grow in a metal building, so there’s a lot of dealing with the elements. We had to put a new roof on because of moisture damage. When you’re [moving out here from] a dry, arid area to grow, you really gotta relearn things like HVAC systems.

[PB]: What are some weed strains that grow well out there?

[TR]: A lot of the Landrace strains that come from humid regions and a lot of gassy strains grow well here. Our Landslide does really great and our DJ Short is phenomenal.

DJ Short is one of the strains that thrives at Sugarleaf Farms.

[TR]: We had a great strain called Huckleberry Soda…we had to stop growing it because it was a Powdery Mildew magnet. If I was growing it in [a dry environment] like Wyoming it’d be great, but it just costs too much to grow for what we could charge. Heartbreaker is another phenomenal strain that we just had to stop growing for the same reason.

[PB]: Do you have any special growing practices that you use? Why?

[TR]: Everything’s getting micro-watered throughout the day so we’re not wasting water or [flushing out] nutrients. We can adjust [watering] on the fly [depending on the strain’s needs].

We use 6x6 rock wool cubes as our growing medium…so we control 100% of what goes into the plant. Too many times we’ve messed with the soils and there’ll be something in there…like heavy metals, that screws the plant over…We’re trying to sell a good, clean product…and when you’re growing with soil you’re kinda messing with that. That’s how we feel, but if you talk to other growers they’ll tell you just the opposite.

Take a closer look at a rock wool set up. photo credit

[PB]: What marijuana strains are you most hyped about growing?

[TR]: DJ Short…checks off all the boxes for me. We really like the gassy strains, we have some Mai Thai crosses that we’re really stoked about. Our Sonic Chronic is quickly becoming a fan favorite. Landslide is another fantastic strain.

[PB]: Have you grown anywhere else?

[TR]: I’ve grown in Colorado, Wyoming, and we got a consultant grower who grows all over the states in California, Oklahoma, Detroit. But it’s almost like a small world up here [in Washington.] You can call up another grower and say “Hey, I’m having this problem, what would you do?” and we can do the same and share everything we know and help each other out.

[PB]: What in your opinion sets Washington weed apart?

Even when I was growing in Wyoming and you got a strain from Washington, you knew it was going to be good. You knew, like, “All the good strains come out of Washington.” Then I moved here and found out why. Effects are almost secondary...they’re into terpenes, and aromas. So it’s really a culture out here, like wine snobs. So it can be great and it can also be a pain in the butt sometimes (laughs).

Thanks for talking to PotGuide! 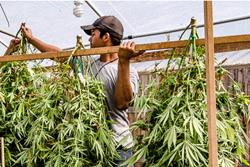