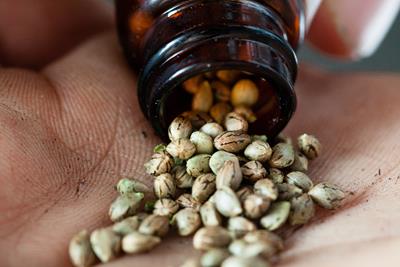 There’s a lot of reasons to store marijuana seeds rather than just planting them in soil and letting them do their work. Sometimes you have some seeds leftover from your new favorite weed strain and don’t have the space available where you live to plant it. Other times, you’re buying seeds for later use once you’ve got the time and energy for your weed growing project. Maybe you’d like to hold on to precious genetics until you can seek out another strain to cross it to. Sometimes you’re just stocking up for an uncertain future.

Whatever the reason, you need to be sure those marijuana seeds stay viable in the long term. Properly stored marijuana seeds can last for up to five years and still remain viable, and some strains have been reported sprouting at ten years or more.

However, proper storage is not as easy as it seems, since seeds are looking for any excuse to start sprouting and there are a number of factors that tell the seeds that the time is right to stretch out their roots and branches. Store your marijuana seeds in the wrong conditions and they might end up dead, rotting, or diseased by the time you’re ready to introduce them to the soil.

First, let’s go over the five main factors to consider when it comes to how to store marijuana seeds, especially for the long term.

When it comes to preserving your marijuana seeds for future planting, temperature is the main consideration. In nature, heat is what tells the seed that the winter’s over, which means that it’s time to break open and start sending roots down and shoots up. 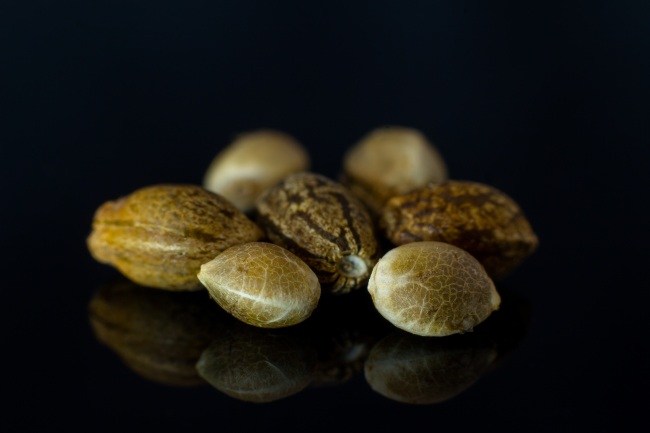 There are a few variables that keep your seeds dormant until you need them to pop. photo credit

41℉ (5 ℃) is the absolute warmest you want your long-term storage spot to be, with the sweet spot being somewhere around 38 ℉.


It’s very important that this temperature remains stable for the long term. If you are refrigerating your marijuana seeds, your best bet is to place them in a separate unit or a spot near the back. Every time that you open your fridge the temperature fluctuates, which can harm the marijuana seeds over time.

While it’s up for debate whether freezing marijuana seeds is an effective method for long term storage, we don’t recommend it unless you know exactly how to cure and prepare your seeds. Otherwise, the frozen water in the seed’s cells can expand, destroying the cell wall and killing the seed.

Watch out for Humidity

Humidity is another enemy in your battle for storing cannabis seeds long-term because any hint of moisture is another clue to the seed that it’s time to stretch its leafy arms and legs. If the marijuana seed shell breaches before it’s in the soil, rot can set in. 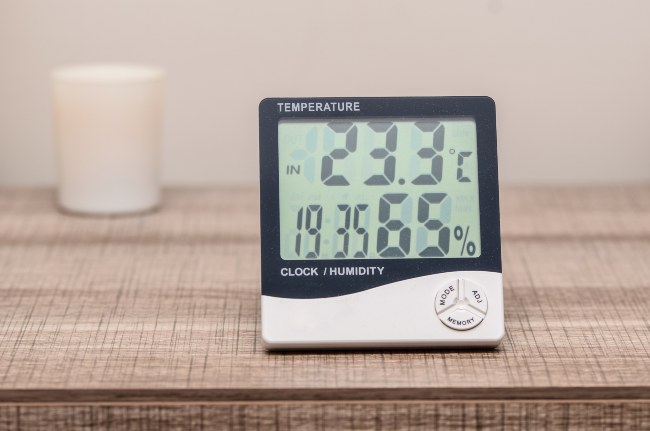 Humidity control is important and having a humidity gauge can be very helpful. photo credit

However, you don’t want your marijuana seed too dry either. A humidity level of about 5% is the maximum that you want to allow in order to keep the waxy, protective layer surrounding the seed intact without triggering the seed to split open.

Store Your Marijuana Seeds in an Airtight Container

Besides being dark, you want to expose your marijuana seeds to as little oxygen and carbon dioxide as possible. These gasses are what growing plants breathe, as well as the pests that consume them.

If you’re storing cannabis seeds by refrigerating them, make your container as airtight as possible. If you have some vacuum-sealed plastic on hand, even better.

Keep Your Marijuana Seeds in The Dark

Much like heat and humidity, light tells that marijuana seed to wake up because it’s time to spring forth. Even if it’s a halogen bulb inside your refrigerator and not the sun itself, the seed’s natural optimism can still start the flowering process. 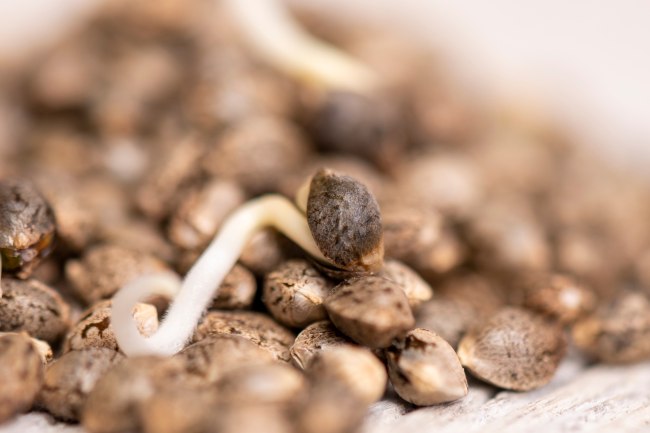 Any type of light can kickstart a seed to start germinating. photo credit

Light exposure over time can also damage the surface of the seed, which in turn will damage what’s stored underneath. The solution, much like storing cannabis flower and other products, is to keep your marijuana seeds in a dark or opaque container. Without exposure to light, they’ll keep dozing long term.

Some weed strains (and some specific batches of those strains) naturally produce seeds that are hardier and longer-lasting than others. This plays a role in how long you can expect your marijuana seeds to remain viable, so be sure to do some research beforehand.

Now that we’ve covered how temperature, humidity, light, air, and genetics work against you when it comes to seed storage, let’s cover the best marijuana seed storage methods.

If you’re storing your marijuana seeds for the short term (a couple of weeks or months), a standard mailing envelope or a tan coin envelope will do in a pinch. If the envelope paper is thick enough, it will protect the seeds from the most harmful ambient light. If the envelope is stored in a cool, dry, dark, and temperature-stable spot like the back of a closet or a drawer, the marijuana seeds should also stay dormant in the short term. 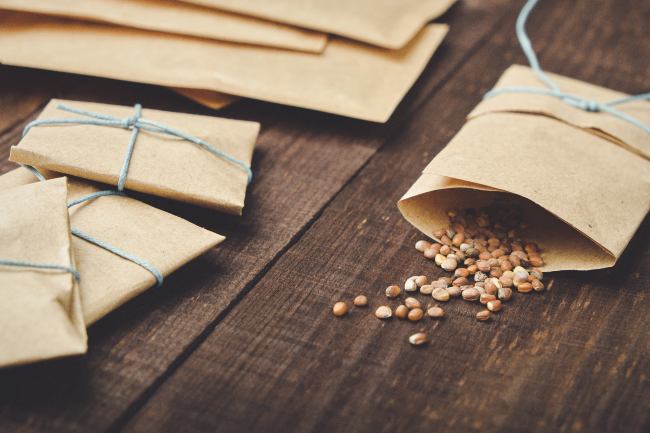 There are multiple ways to store your seeds and paper envelopes keep the shortest. photo credit

Plus, an envelope makes it easy to write the name of the weed strain, the date of storage, and any other important notes you have. If you want to be extra safe about it, throw some grains of rice or a desiccant pack in there to regulate the humidity.

Of course, this method is only as good at the stability of your home’s climate. If you live in a humid area prone to frequent storms or weather fluctuations like Florida, envelopes will only get you so far without ruining your marijuana seeds.

Unlike a mailing envelope, glass jars are airtight, which makes them much more suitable for storing cannabis seeds long-term. Because many types of plastic can let small amounts of water in overtime, it’s highly recommended that you use glass with rubber stoppers. When storing cannabis seeds long term, you should also throw in a desiccant pack to keep the humidity stable.

Having lightproof containers are key to preserving your seeds. photo credit

Be sure to separate the pack from the marijuana seeds with a couple cotton balls or a paper towel. This will help absorb excess moisture at the start as well. If you have a method to vacuum seal the jar even better. Wrap the jar in something opaque and you’re all set. Marijuana seeds stored at a stable room temperature can last for over a year. Refrigerated they can last a couple years.

If you’re looking to store your cannabis seeds long term, vacuum sealing your seeds in thick Mylar bags can keep your seeds viable for up to half a decade. Because the bags are designed for long-term storage, they’ll work well for your marijuana seeds as long as you make sure they were stored at the right humidity (again, a desiccant pack helps with this) and away from the light. This is one of the best options if you’re refrigerating marijuana seeds.

In conclusion, storing cannabis seeds for the long haul is relatively simple. They will stay viable as long as they’re kept away from heat, light, moisture, and air. The more care you put into your storage method, the longer your marijuana seeds will last. However, when it comes to planting marijuana seeds with the most chance of success, sooner is always better.

What are your best methods for storing seeds? Share in the comments below!