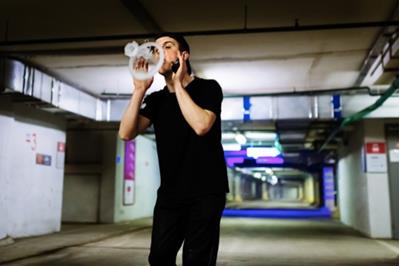 We’ve all seen cool smoke tricks in movies and TV shows, but to actually do them may seem impossible if you don’t know how they’re done. You don’t need to be trained in Hollywood to achieve pro smoker status; just practice and patience.


Always do these tricks with cannabis instead of tobacco, and make sure you don’t smoke yourself silly just to achieve the trick.  If you ever wanted to impress your friends at your next smoke sesh, we’re here to decode how to get some of the coolest smoke effects. Read on to find out the top 10 smoke tricks you can practice right now, from easiest to hardest.

Some might consider smoke bubbles to be a cheater’s trick, as it doesn’t require mastering a breathing technique. However, we can’t all dedicate our time to mastering smoke trick breathing. If you want a cool-looking smoke effect that you can do right now, just grab a bottle of bubbles like you had as a kid. 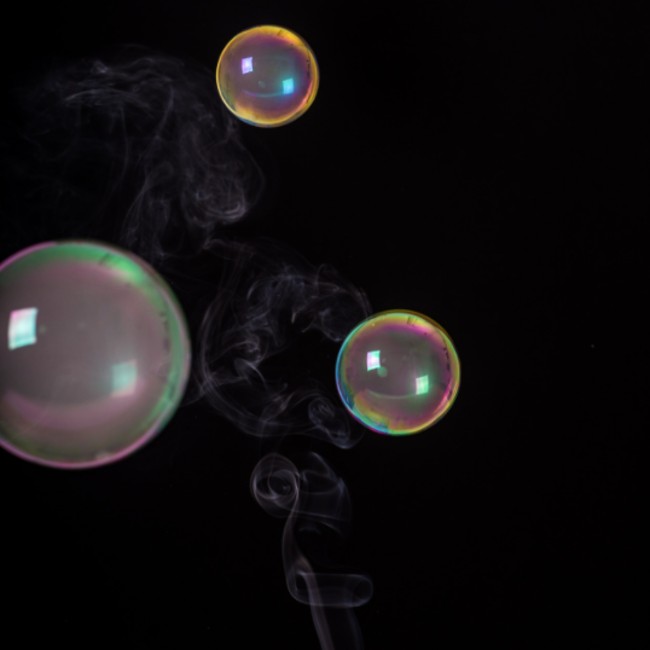 First, dip the stick from the bubble bottle in the soap solution. Blowing the smoke of your well-lit joint through the ring of the bubble stick will trap the smoke inside the bubble, creating a witch-like effect which looks extra cool when the bubbles are popped. Try this one out at your next cannabis-friendly Halloween party to wow the crowd.

We recommend mastering the ghost inhale as your first smoke trick, and using it to warm up when practicing. The Ghost Inhale is fairly easy and will help you practice the right kind of breath and mouth formation you will need to master other tricks.

Start with a well-lit joint, as you need to be able to see thick smoke to get the effect. Draw on the joint, but keep the smoke in your mouth by closing off your throat with the back part of your tongue. With the smoke trapped in your mouth, open your lips slowly. Don’t breathe out, just let the smoke gently tumble out. Keep your mouth close to the smoke cloud, and suck in the cloud of smoke like a vacuum. This time you can inhale all the way into your lungs. When perfected, this trick should look like a ghost escaping from your mouth and being drawn back in. 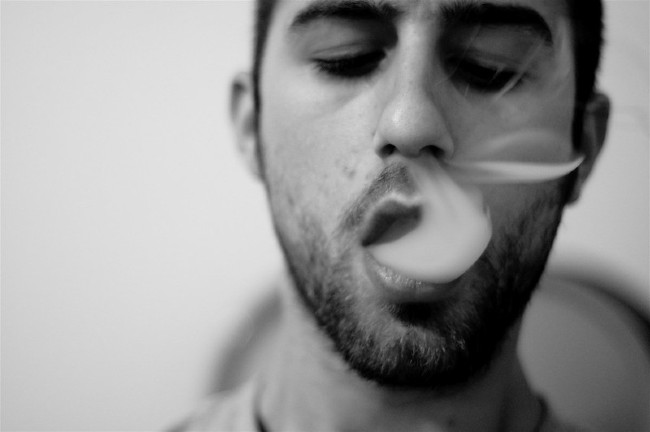 The hardest part about this trick is isolating the inhale to your nose so the smoke in your mouth doesn’t get drawn in too. Practice closing off your throat with the back of your tongue. Keep trying and the technique will click one day!

Another beginner’s trick you can master is the Smoke Tornado. Perfect trapping the smoke in your mouth without inhaling all the way into your lungs. With the smoke trapped in your mouth, put your lips near the surface of the table and allow the smoke to pour out. The smoke will sit on the table’s surface. In order for the smoke to pool properly, ensure that there is little to no breeze in the room.

Sweep your hand through the sitting smoke and upward in an L-shaped motion (forwards into the smoke cloud, then lift your hand straight up like a reverse chop). This should catch some of the smoke which will rise up in a tornado effect. You’ve got it right when the smoke forms a twisting line upwards.

If you’ve mastered the French Inhale and you think you’re ready to take it up a notch, try the Bane Inhale. This uses the same technique with one small change. When you open your mouth to create a small opening, let the smoke pour out through the gaps near the gum line of your bottom teeth before inhaling through your nose. The spaces in your teeth will make the smoke rising up to your nose look like werewolf fangs, or the iconic batman villain from The Dark Knight Rises.

Ah, the stoner classic. Smoke rings are the most difficult trick so far, but with some practice you can blow smoke Os like Gandalf.

Start by drawing the smoke into your mouth without inhaling all the way into your lungs. Open your lips in an O shape, and use your tongue to push the smoke in your mouth through your lips a little at a time, giving a tiny exhalation while doing so. 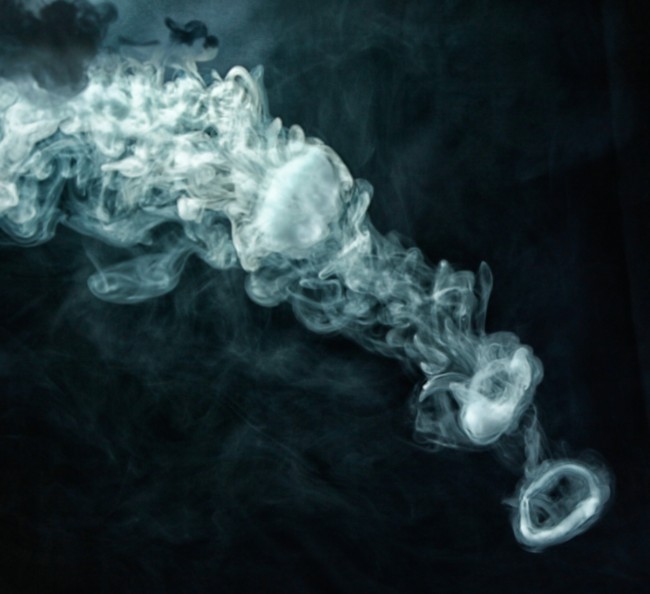 You’ll want to hold your tongue in so that it’s positioned in the center of your mouth behind the O.  It’s almost like saying “oh” and cutting off the syllable as it comes out, creating a tiny puff of air. Practice makes perfect with this technique so don’t give up if you don’t get it the first time!

This one can be especially tricky at first, but play around with your mouth shape until it feels like you’re getting closer to the O shape.

If you’re a master of smoke rings and ready for a challenge, try the O through O method. This trick could even be a fun competitive game for smokers.

Blow one smoke ring, then position your lips a couple inches behind it. The trick here is to move slowly so you don’t disturb the smoke of the first ring. Aim your second smoke ring through the middle of the first. Try to see how many you can get inside each other as a challenge.

Try this classic weed smoker’s trick the next time you’re toking with a friend. Trap the smoke in your mouth like you do in the other tricks.

Position your lips about 2 inches away from your friend's mouth, and let the smoke pour out without exhaling. Have your friend suck in the released smoke like a vacuum. The perfect Shotgun will look like a clear line connecting the two mouths.

Jellyfish uses a similar technique to O through O. Start by blowing one smoke ring. Move slowly to position your mouth about one inch behind the floating smoke ring, without disturbing its shape. 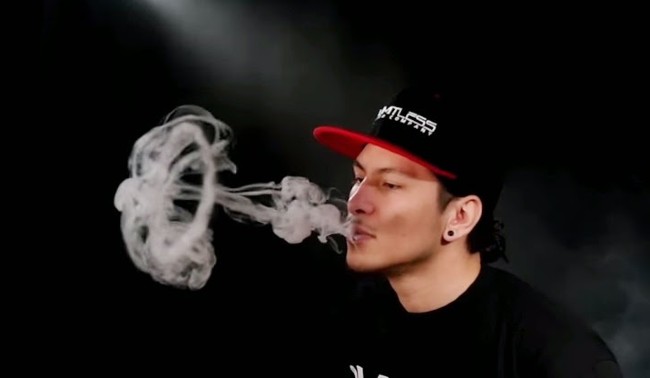 Open your mouth without blowing out, and let the smoke trapped there gently pour through the middle of your smoke ring. When done correctly, the smoke wraps around the edges of your O, creating a floating jellyfish.

If you’ve mastered smoke rings and have a friend handy, try this advanced two-person trick. Position yourselves with your faces 1-2 feet apart. Have one friend blow a smoke ring at the other friend. When the O gets close to the other person’s face, have them inhale through their nose. The ring will get sucked into the nostrils in the shape of a bull-ring piercing.

There you have it; 10 top smoke tricks to master if you want to be crowned king of your smoke circle. Have you perfected any? Let us know in the comments!

What is the Easiest Smoke Trick to Learn?

It’s probably best to start with a ghost inhale or French inhale. These are good beginner tricks because they are relatively simply to do, and will establish skills used for more advanced tricks.

Does It Hurt When You French Inhale?

For some, the French inhale (or the Bane described above) will cause some irritation to the nose. You’re introducing hot smoke into your sensitive nose, so expect at least a little change in comfort. Using cooled smoke (such as that from a bong) can help to lessen the discomfort. Regardless, it is best to go slow and only practice at your comfort level.

What’s your favorite smoke trick? Which one is the easiest to learn? 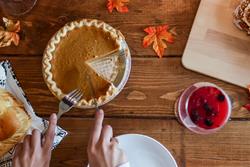 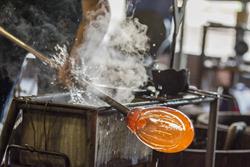