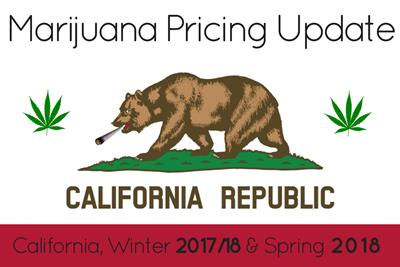 California’s recreational cannabis market has been largely successful since starting in January of 2018. And as the Golden State continues to work the kinks out in terms of licensing, regulations and cannabis taxes, we expect to see an increase in revenue and overall success of the marijuana industry in the coming months and years. Enough speculation though. Let’s dive into our first California pricing report containing statistics on the state’s new adult-use marijuana program.

Of course, we could not bring you this information without the help of our friends at BDS Analytics. Collected from dispensaries all across California, their point of sale information and market insight is what drives these pricing reports. We rely on BDS Analytics to provide accurate, up-to-date information so that you, the consumer, can stay educated on the ever-changing cannabis pricing trends.

As mentioned above, California entered the ranks of states offering cannabis sales to adults 21 and over in January of 2018. As the nation’s most populous state and the world’s sixth largest economy, California immediately catapulted to the top position as the largest adult-use cannabis market in the country.

Despite a reputation for an abundance of grow sites across the state, many of the cultivators were not licensed at the onset of adult-use sales which resulted in supply constraints. As has been experienced in other states, initial demand outpaced supply resulting in retail cannabis prices climbing in early 2018 compared to 2017. Many dispensaries chose to partially absorb some of the cost increases to offset the heavy burden of taxes on consumers. Regardless, we witnessed a marked increase in flower prices. Between December 2017 and January 2018, the average retail price for a gram of flower increased $0.87, or nearly 10 percent on a pre-tax basis. 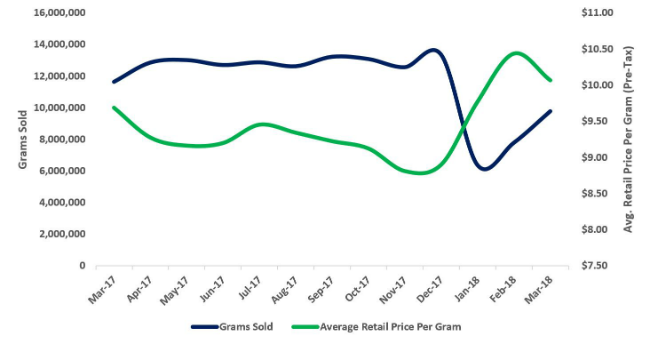 Large increase in the retail selling price of flower seemingly induced consumers to opt for other product categories or to turn to lower prices on the black market. In the first three months of 2018, flower sales contributed less than 42 percent of revenues at California dispensaries whereas in the last 3 months of 2017, nearly 48 percent of revenues came from the sale of flower/bud.

The $9.77 average retail price (pre-tax) per gram in January 2018 was the highest average gram price recorded in California since BDS Analytics began tracking California dispensary sales in March 2017.  While additional dispensaries and cultivators were licensed in February, the increase still didn’t meet demand and prices increased another $0.67 from the previous month, peaking at $10.44 a gram. In March of 2018, further supply increases and more promotional pricing helped ease flower prices from February’s peak. Compared to the previous March, flower prices were still $0.38 a gram higher this year whereas prices in other states have declined over time. 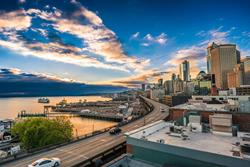 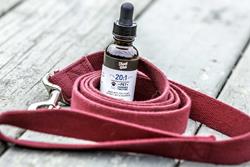 CBD for Pets and Why It's Effective

CBD for Pets and Why It's Effective