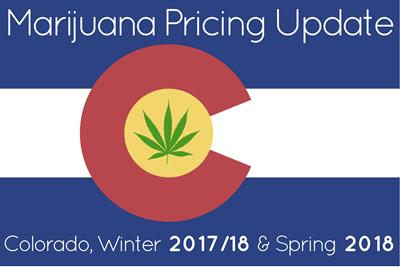 Summer is almost here and that means we’re due for another installment of cannabis pricing updates. The past winter and spring have been booming in the state of Colorado and we’ve teamed up yet again with our friends at BDS Analytics to share with you the latest market insights.

BDS Analytics gathers point of sale information from a wide variety of dispensaries across the Centennial State to provide detailed pricing reports and trends. We couldn’t bring you these pricing updates without BDS’ industry expertise and accurate information. So, without further ado, let’s take a closer look into Colorado’s winter/spring pricing data.

Between January 2014 and March 2018, dispensaries in Colorado sold nearly $2.7 billion in loose cannabis flower/bud. Since 2014, the average retail selling price of flower has declined steadily and that decline has helped drive increased demand for the category. In the past, growth in sales volume more than offset lower prices and overall revenue from the category increased. However, in the last three quarters, sales have declined from the previous year indicating that we have moved past equilibrium and that continued declines in prices will only hurt the market further.

Flower has historically been the largest product category of sales in Colorado but its significance on Colorado’s cannabis market has been diminishing over time and has recently become more evident as other categories like concentrates and vape cartridges rise in popularity. In Q1 2018, just 45 percent of revenues were contributed from the sale of flower, down from 48 percent contribution in Q4 2017 and 52 percent in Q1 of 2017.

In the 12 months ending in March 2018, the average retail price per gram of flower was 55 percent higher at adult-use locations than medical locations. Average retail prices for flower peaked at $6.65 a gram (pre-tax) for medical dispensaries in May of 2014. For adult-use retailers, the peak was $10.61 in August of the same year. Since peak pricing, the average price for a gram of flower in March 2018 was 48 percent lower in the adult-use channel and 47 percent lower in the medical channel.

Despite the continued drop in pricing, the decline in average flower prices has actually slowed in recent months. Between April 2017 and March 2018, average flower prices declined just three percent. In terms of differences between product category and the top 10 selling strains, the reasoning appears to be value. In March, the average retail selling price for the top 10 selling strains was just $4.27 a gram, 12 percent lower than the category average. While the price has declined just three percent for the total category, the average retail price has declined 15 percent among the top sellers. Cannabis Industry Regulations: Is There a Need for Uniformity?

Cannabis Industry Regulations: Is There a Need for Uniformity? Microdosing Cannabis: All the Health Benefits with Minimal Effects

Microdosing Cannabis: All the Health Benefits with Minimal Effects