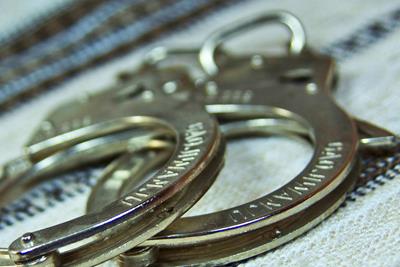 Colorado is very progressive when it comes to cannabis laws but has been lagging in its stance on petty marijuana convictions. As it stands, those with low-level cannabis convictions (non-violent convictions involving the possession of two ounces or less of cannabis and/or paraphernalia) prior to legalization in 2012 still face issues when it comes to gaining employment and housing in the area.


Though people with petty cannabis convictions can currently petition the government to have their record sealed from public view (which blocks employers and housing officials from seeing the offence) the process is timely and confusing and comes with a $65 price tag to boot. Many people with petty convictions on their record choose not to pursue this option, especially if it does not appear to directly affect them. Only five percent of eligible cases are estimated to be brought to court. Luckily, some recent progress has been made and Colorado is primed to right some of the wrongs caused by cannabis arrests, specifically in Denver. Let’s take a closer look.

Overview of the “Turn Over a New Leaf” Program

Unfortunately, most petty cannabis conviction cases involve minorities which disproportionately affects them and their ability to gain employment, especially in the state’s cannabis industry. In an attempt to rectify this discrepancy, Colorado officials have enacted the Turn Over a New Leaf (TONL) program that will help these petty crimes be wiped clean, rather than just hidden from public view. The expungement of low-level cannabis crimes is an attempt to level the playing field for the cannabis industry. According to Denver Mayor, Michael Hancock, “This is about equity for our communities of color and individuals who were disproportionately impacted by low-level marijuana convictions that are no longer crimes in Colorado.”

It's important to note that the TONL program only applies to low-level cannabis crimes committed in Denver.

The City of Denver is even taking steps to ensure the process is as easy as possible for people and the Marijuana Industry Group, a company that supports growers, sellers, and other industry professionals, will also cover fees. 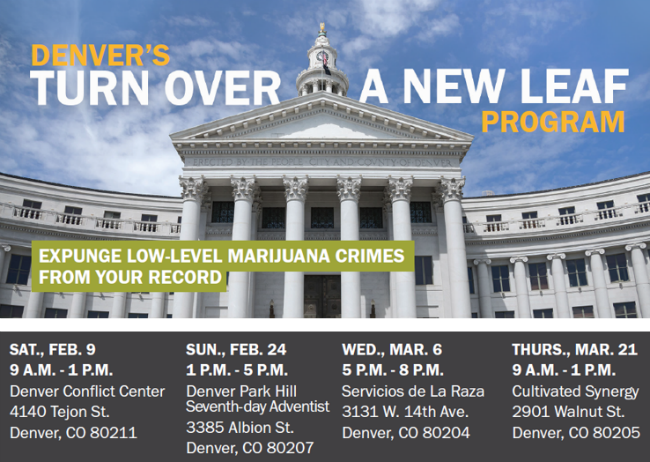 To participate, applicants simply apply online and fill out the required information. Additionally, people may bring a government-issued photo ID to one of the following clinics:

Documents can be filed easily online though there are also a series of clinics to be held which will help guide people through the expungement process. Documents will be drafted at these clinics and applicants provided detailed information about the next steps in the process.

To work in the cannabis industry in Colorado, residents must not have any past drug convictions. Because petty cannabis crimes disproportionately affect minorities (black and Latino people make up roughly 36 percent of petty cannabis convictions but only take up about 23 percent of the state’s overall population), an uneven number of Caucasians make up the majority of cannabis business owners.

By expunging low-level cannabis crimes, the state hopes to level the playing field to give everyone an equal opportunity to grab their piece of the cannabis industry. According to Representative Jonathan Singer of Longmont who also supports (TONL), “We have to be very cognizant of the fact that legalizing marijuana wasn’t just about making sure people who want to have a good time can do it without getting in trouble, but also about leveling the playing field for people who’ve always been disproportionately affected by these laws.” Passage of the “Turn Over a New Leaf” bill would be a huge step in the right direction.

What are your thought on Colorado’s Turn Over a New Leaf program? Share them in the comments below! 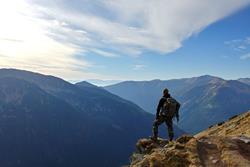 The Best Cannabis Strains for Adventure and Exploration

The Best Cannabis Strains for Adventure and Exploration