Hemp is quite an amazing plant with applications for use ranging from nourishment to shelter and thousands of things in between. But before we get too far into the amazing applications for industrial hemp, let’s take a look at the history of hemp cultivation in America.

The History of Hemp in America

Prior to marijuana prohibition, hemp was the crop of choice for producing things like paper and textiles (the original American flag was even made out of hemp) because of its hardy nature and versatility of use.

Hemp cultivation was so important to early Americans, in fact, that it was illegal not to grow it in places like Virginia, Connecticut and Massachusetts in the early 1600’s. Subsidies were also offered to farmers in the 1700’s who agreed to grow hemp on their land.

Then in 1892, cotton made its grand appearance on American land and suddenly hemp had competition.

Cotton production overtook hemp production largely due to the introduction of the cotton gin which could quickly separate cotton from seed. Because hemp harvesting and production was still largely done by hand, cotton production became a more efficient option. Although hemp cultivation continued (primarily in Kentucky), cotton became the more desirable crop throughout most of America.

Then, in the 1930’s, “Reefer Madness” took the country by storm crippling a largely unsuspecting hemp industry. Though farmers could still technically grow hemp at the time by paying a fee and agreeing not to use it as a drug, the introduction of synthetic fibers coupled with a struggling economy ultimately put many hemp farmers out of business.

In recent years, there has been an increasing demand for hemp cultivation again. An amendment made to the federal Farm Bill in 2014 distinguishes hemp from cannabis sativa (marijuana) because of its low THC content and allows for its cultivation on limited grounds, specifically government-approved research. Currently, 22 states allow hemp cultivation in America.

Americans have always loved their hemp products. Though there are a few states that currently allow hemp cultivation, the bulk of hemp products consumed in America are imported from China and Europe. To help improve our economy (and environment), we need to ramp-up hemp cultivation on American soil so we can create some amazing products out of it.

Here are a few of the coolest things that can be made out of hemp.

We cannot speak highly enough about the benefits of industrial hemp. With so many applications and such potential, there is no reason not to support the hemp industry.

What hemp product excites you the most? Let us know on Facebook or send us a Tweet. 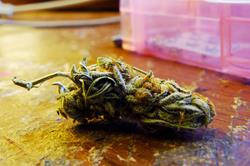