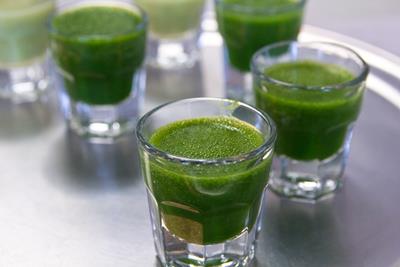 Many dieters and health enthusiasts juice their vegetables and for good reason. Juicing produces a nutrient-rich beverage that is both easy to consume and easy to digest. And because it's easy to make-and-take, it's perfect for even the busiest schedule.

Cannabis, one of the world's most beneficial vegetables, can and should be juiced too. According to Dr. William Courtney, juicing cannabis is the healthiest, most beneficial way to consume this amazing plant. He claims that many of the same illnesses that are treated with cannabis can actually be prevented through the regular consumption of raw cannabis juice and has treated over 7,000 patients using this method.

Aside from the fact that cannabis is a vegetable with many of the same nutrients as other leafy greens (like fiber, iron and calcium), it is jam-packed with beneficial cannabinoids that are unique to the cannabis plant. In other words, juiced cannabis is a nutritionally-dense, very potent medicine.

The high concentration of cannabinoids in juiced cannabis coupled with the perfect balance of fatty acids could help improve cell function and reduce damage caused by free radicals. Additional benefits of raw, juiced cannabis include reduced inflammation and the facilitation of two-way cellular communication. Many cannabinoids also have anti-tumor properties which are readily available through the consumption of raw marijuana.

Like other vegetables, however, cannabis loses a great deal of its nutritional value once heated. The cannabinoid profile also changes after cannabis has been heated by converting THC-A into THC and CBD-A into CBD. With THC now replacing THC-A, the user could get stoned, but by juicing cannabis (rather than cooking or otherwise heating it), consumers can avoid the high altogether without compromising its other valuable components.

Because raw, juiced cannabis produces no high, it is possible to consume much larger amounts of beneficial cannabinoids. For example, CBD has been shown to halt -- or even reverse -- the growth of certain cancers but only in extremely high doses. The FDA has established a 600mg daily allowance of CBDs (pdf) but only 10mg or less for THC. Given the fact that most cannabis strains contain less than .01 percent CBD and well over 10 percent THC, reaching the 600mg daily allowance for CBDs would be impossible without juicing it first.

How to Juice Cannabis

When gathering ingredients, remember fresher is always better. That's because veggies begin breaking down (losing valuable enzymes) the moment they are harvested. To get the most out of a cannabis smoothie, it is recommended that only the freshest produce (including cannabis) be used. For those who live in a state that allows personal marijuana cultivation, an outdoor greenhouse or indoor grow closet is recommended to produce enough cannabis for juicing.

To make cannabis juice, simply add 15 large fan leaves and two, 2- to 4-inch buds in a juicer. Make sure the buds are ready for harvest by ensuring that the trichomes (the little, sticky crystals all over the flower) are amber rather than clear in color. Avoid using dispensary nugs that have been cured for smoking, though -- it won't work and you will waste your weed.

To cut down on the strong cannabis flavor, Courtney recommends mixing it with other vegetable juices such as carrot, cucumber or sweet potato with a ratio of one part cannabis juice to five parts vegetable juice. The mixture can then be consumed immediately or covered and stored for up to three days.

Courtney recommends consuming one cup of the cannabis cocktail three times a day for optimum results.

In conclusion, juicing cannabis is becoming a popular option for many health-conscious individuals in 420-friendly states. It is quick, tasty and hugely beneficial. Though research is still limited on the benefits of consuming raw cannabis, anecdotal evidence suggests that it might well be the magic elixir we’ve all been dreaming of – if we could just keep from packing it in a bowl, first.

Would you juice your cannabis? Why or why not? 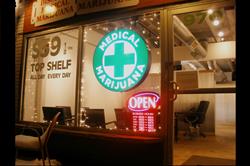 How to Open a Dispensary in Colorado

How to Open a Dispensary in Colorado